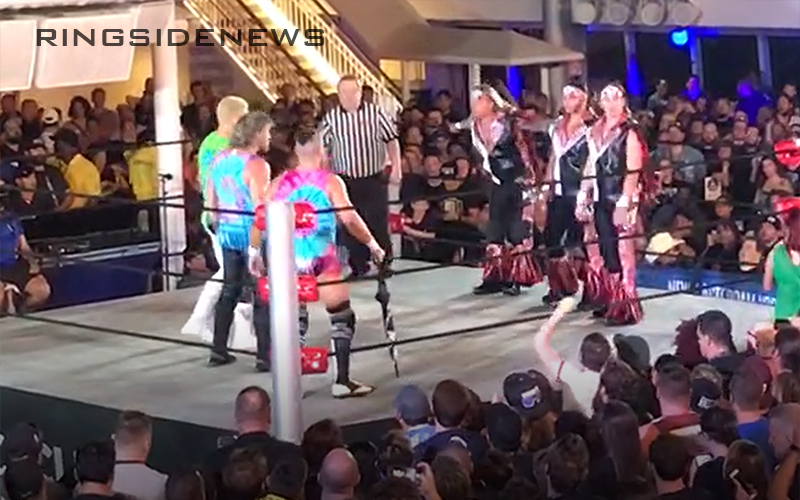 Chris Jericho’s Rock n Wrestling Rager at Sea featured plenty of amazing pro wrestling, music, and drinks with the best names ever. But one match stole the show and we just so happen to have an exclusive video sent to us from a fan of The Bullet Club vs Alpha Club.

Yes, they were trying really hard to stop people from filming during the cruise but one brave fan of Ringside News got us this footage.

Kenny Omega, Marty Scurll, and Cody Rhodes took on The Young Bucks & Chris Jericho and as you can see — the crowd was electric. This is just a fan video of the match so if you enjoyed it, please get the special when it airs on Fite because you’ll get a much better quality.

The video quality doesn’t take away from the action or the excitement though as the cruise ship was rocking in a good way and it had nothing to do with the ocean waves. We’re not going to spoil the ending either, but it’s safe to say that the entire crowd was more than entertained by this epic tag team match made up of some of the best pro wrestlers on the planet — or the ocean for that matter.

Only time will tell if we’ll ever see this match happen on land, but it certainly worked wonders out on the water during the Chris Jericho cruise.