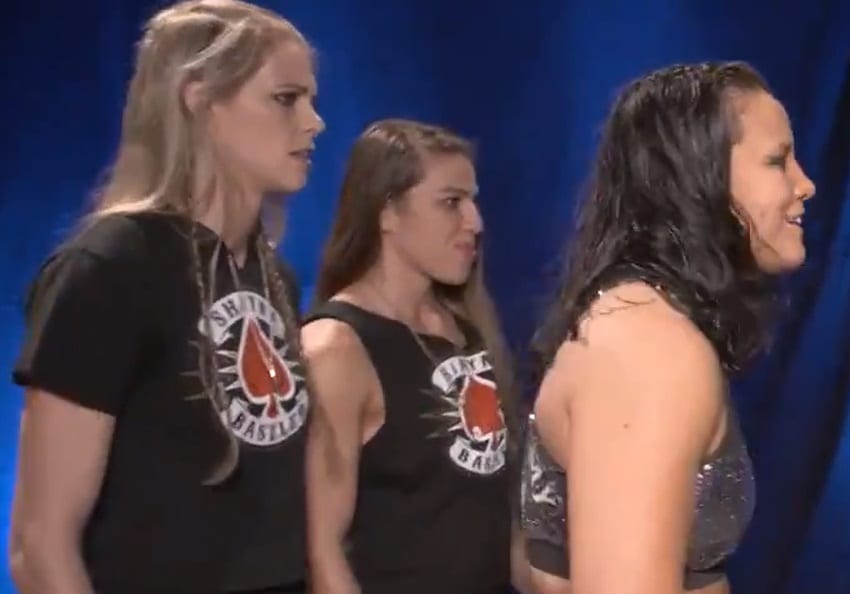 WWE Evolution featured plenty of fantastic matches that fans are talking about this morning including the NXT Women’s Title match which saw Shayna Baszler capture her 2nd championship. But, she didn’t do it alone because Jessamyn Duke and Marina Shafir were ringside and got involved. After Baszler won, she invited her friends to walk up the ramp with her meaning that they’re not official in the storyline.

This was a great way to debut Duke and Shafir on WWE television, but they will likely be carrying on with the story on NXT’s Wednesday night show instead of Raw or SmackDown.

The plan has been floating around for a while of a 4 Horsewomen vs 4 Horsewomen match in WWE, but as Dave Meltzer explained on Wrestling Observer Radio, that might be farther away than some fans might like at this point.

“This obviously keeps her on the NXT roster for a while. The thing with Shayna is that she’s 38 so it’s like she’s in good shape and everything but at some point it’s kind of like — and I know she’s not ready for the main roster. I mean she could be there with Ronda as Ronda’s partner and it would work. But then she’d have to be a babyface and she needs to be a heel and Ronda absolutely doesn’t need to be a heel right now. I mean that would be — not that’s just a bad one. I’m not saying not ever, but not now.”

A 4 Horsewomen vs 4 Horsewomen match was teased during the Mae Young Classic last year but it didn’t happen — presumably at Survivor Series which would make sense seeing how it’s the next big event on the calendar. It doesn’t look very likely this year either… but there’s always 2020.

Only time will tell what they will do in the upcoming months when it comes to the 4 Horsewomen — after all it would be hard not to pop if Baszler, Shafir, and Duke appeared on Raw for whatever reason. But at this time, NXT might be the best spot for the remaining 3 Horsewomen until the time is right, whenever that might be.