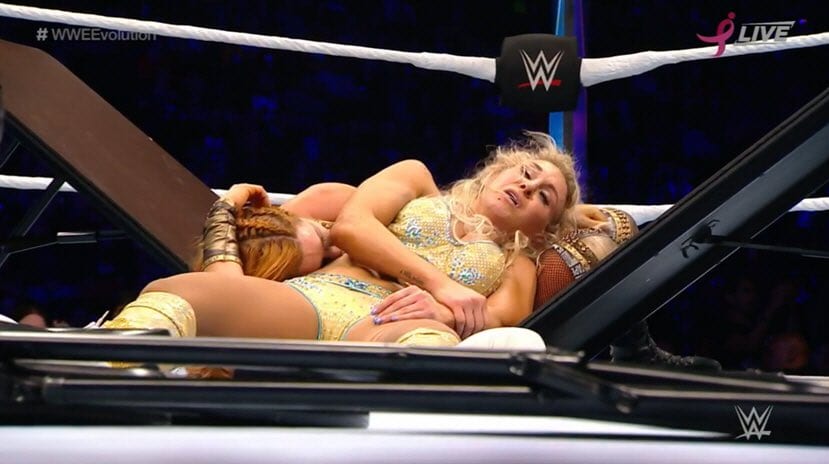 Becky Lynch’s heel turn meant a change in personality, but it certainly didn’t mean that she wouldn’t be successful. Lynch captured the SmackDown Women’s Title from her old best friend Charlotte Flair after attacking her at SummerSlam to kick-start her heel turn and it was off to the races after that.

But at WWE Evolution, things took a very violent turn during their last woman standing match. It is the first match of its kind for women in WWE, and any future matches will have an amazing contest to live up to. There were tables, ladders, and chairs throughout the match.

Flair tried to take Becky Lynch’s knees out by focusing on her legs — she even did a Figure 8 through the ladder which made the Lass Kicker tap out. But the match carried on after Lynch got a chair and whacked her way free from the hold and got back to her feet on the outside.

This was a brilliant idea for a spot. But it still wasn’t the end of the match. However, it really did some real damage to Becky’s legs- She tapped out in the Figure 8 but it doesn’t count in a last woman standing match — #WWEEvolution pic.twitter.com/5KtIGk8cqq

In one spot, Lynch took a bump onto a pile of chairs and then Flair soon did the same. Flair set Lynch up for a spot through the table, but the wood didn’t break with a moonsault — so they did a second take and the table certainly broke that time.

A ladder got involved and Lynch hit a brutal drop through the announce table on Flair. Becky even tried to pile chair and a broke table on Flair, but she still got up.

How can ANYONE get back to their feet after THAT?!

Finally, they set another table up on the outside while Michael Cole asked, “another one” and the 3rd table bump did the job. After powerbombing Charlotte Flair through a table from the top turnbuckle to the outside — Flair was unable to get to her feet by the referee’s 10 count.

Therefore, the winner and still SmackDown Women’s Champion is Becky Lynch after an incredibly hard-fought battle at WWE Evolution.