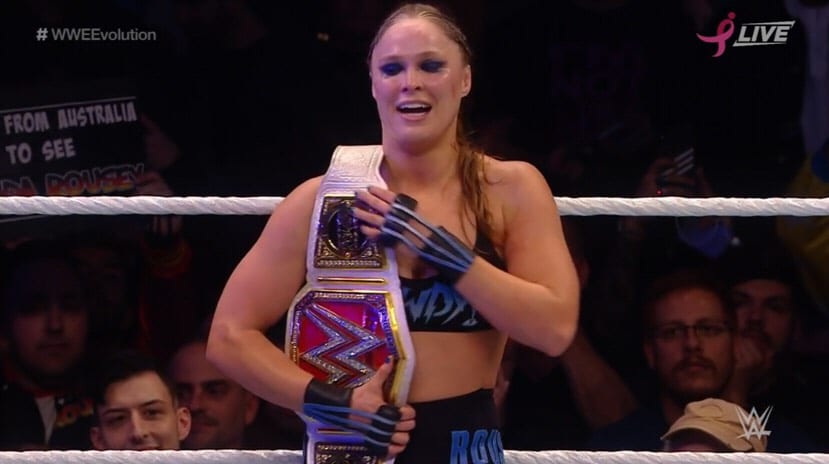 Ronda Rousey entered the WWE Universe as a surprise at the WWE Royal Rumble pay-per-view event after the first-ever female Royal Rumble match. That led to a program at WrestleMania 34 in a match that stole the show for a lot of people. Since then, it’s been straight to the top for Rousey.

Ronda defeated Alexa Bliss for the Raw Women’s Championship at SummerSlam and since then, she’s held the title proudly. Then Nikki Bella turned on her which led to a grudge match in the main event of WWE Evolution.

Rousey started off by taking advantage of Bella and then she missed a cross body block from the top rope which caused some damage. Rousey would soon hulk up and hit a double German Suplex on both Bella Twins in a pretty great display.

Then Rousey hit a German Suplex on Nikki that sent her out of the ring so Ronda followed. After tossing Nikki back in the ring, Brie got involved and Rousey sent her over the announce table. Suddenly, once Rousey got back in the ring, she ate an Alabama Slam on Rousey for a very close near fall.

Rousey took a shoulder to the ring post and then Nikki hit the Rack Attack 2.0, but Rousey kicked out at 2 again to shock the Total Divas/Bellas star. It didn’t take long before Nikki tried to jump on Rousey from the top rope, but Rousey plucked her off and slapped on an armbar for the win to retain her Raw Women’s Championship.

Therefore, WWE Evolution, WWE’s first-ever all-female pay-per-view ended with Ronda Rousey celebrating, giving a shout-out to Roman Reigns, and kissing her husband Travis Browne who was at ringside. As Rousey walked up the ramp, she found the rest of the WWE Women’s locker room standing on the ramp to congratulate her to close out the historic event.

Who loved how this match turned out at #WWEEvolution? pic.twitter.com/fZBr00UwnU