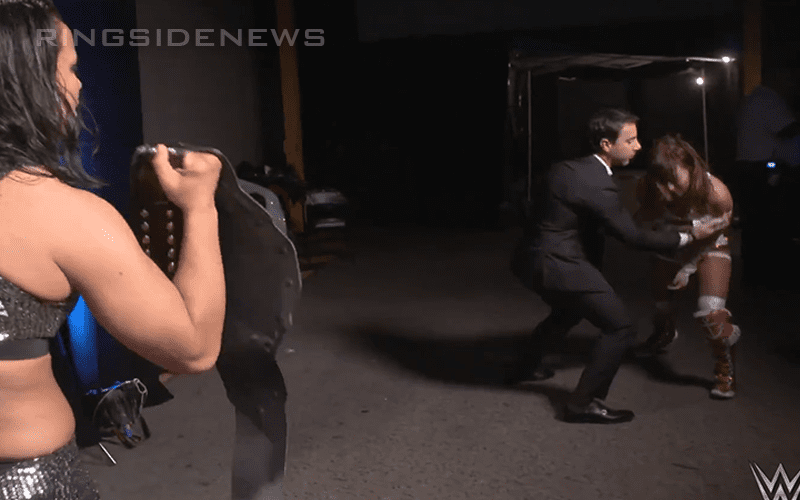 WWE Evolution featured a couple matches that more than delivered. Although it was hard to top Becky Lynch vs Charlotte Flair in a last woman standing match, Shayne Baszler’s defeat of Kairi Sane to capture the NXT Women’s Championship and become a two-time champion was an impressive display as well.

After everything was said and done, Baszler was joined with her 4 Horsewomen friends Jessamyn Duke and Marina Shafir backstage at WWE Evolution. They were obviously happy that they proved their point of dominance over the NXT Women’s roster once again — but then we saw something very interesting take place.

Shayna said that she proved that Kairi Sane didn’t beat her before — she lost the title herself. Then Kairi came limping up to Baszler and wanted to continue the fight. Instead, Sane fell limp to the floor as she was unable to continue the fight. Her heart was still wanting to fight — but her body had enough that night.

Only time will tell how the NXT Women’s Championship will be used to tell the rest of this story, but if you weren’t already paying attention to NXT before — after Toni Storm vs Io Shirai and Shayna Baszler vs Kairi Sane, hopefully, WWE Evolution at least turned a few more eyes to WWE’s outstanding developmental system.

EXCLUSIVE: The drama has spilled BACKSTAGE at #WWEEvolution as @KairiSaneWWE attempts to confront @QoSBaszler after losing the #WWENXT Women's Championship. pic.twitter.com/mCQ19PPVmA