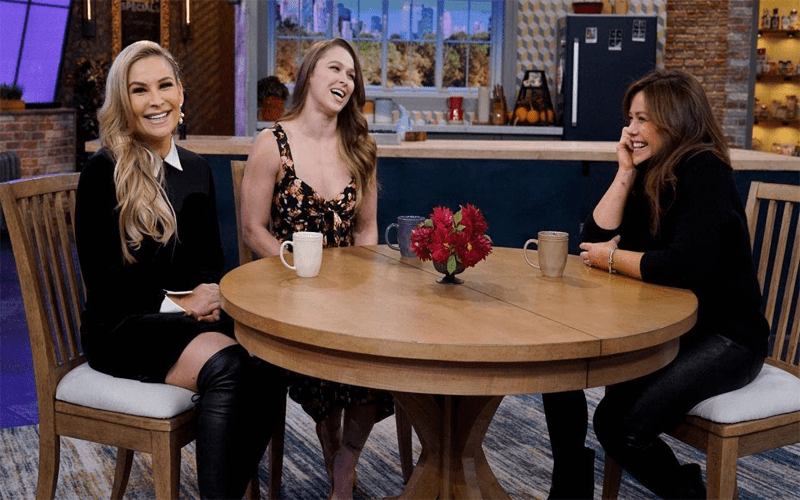 RAW Superstars Natalya and RAW Women’s Champion Ronda Rousey stopped by the Rachael Ray Show where the two sat down with the host to discuss the Evolution PPV and their legacies in the business.

The two Superstars were first asked by Ray to explain what the Evolution PPV is.

“I’ll start it. Evolution is the first-ever all-women’s PPV for the WWE.

“It’s huge, and I really believe WWE is social commentary for the entire world, and the women’s evolution in the WWE is a reflection of the women’s revolution happening around the world right now.”

“It’s awesome because it’s the past, the present and the future of the women in WWE coming together. Women from the past like Trish Stratus and Lita. Women from NXT like Shayna Baszler, and the girls on the main roster.”

Given how historic the event is, Ray asks both women what they should most be excited about heading into the PPV this Sunday, which takes place at the Nassau Coliseum in Uniondale, New York.

“Well, Ronda is in the main event. So I’m pretty stoked about that.”

“I’m just excited that the same company that was having bra and panty matches before is now elevating the women and having them be headliners for PPVs and taking them really seriously.”

“It’s just a testament to how far we’ve come as women in WWE, and you look at women like Stephanie McMahon and Michelle Wilson.

“They’re two women that we can look up to in the company. You look at Triple H, and he is also one of the people that helped spearhead the women’s division in WWE from NXT now to the [main roster].”

Now onto Natalya specifically, the host asks Natalya to give the audience an insight into her family’s legacy and to explain how it was growing up in that house.

“Growing up in my family, we had a wrestling ring in our backyard. We even had our own kid’s wrestling promotion called the KWA. [It stood for] the Kid’s Wrestling Association. I had many roles, but for us, wrestling is an art and I know Ronda can relate to that too, because she, you know, has been involved in the very physical aspect of MMA and wrestling. It’s all- for us, it’s so much an art, but for my family, it’s like… my father was a wrestler, my uncles were wrestlers, my grandfather was a wrestler.”

Ray makes the comment that it is in her blood, as Natalya continues.

Finally, Rousey is asked who the mushier person is between herself and her husband, who is an MMA star.

“Yeah, we just cry all over one another and then we leave the house and look tough.”

You can watch the entire interview below:

What match at Evolution are you most invested in? Let us know your thoughts, opinions, and reactions in those comments below.