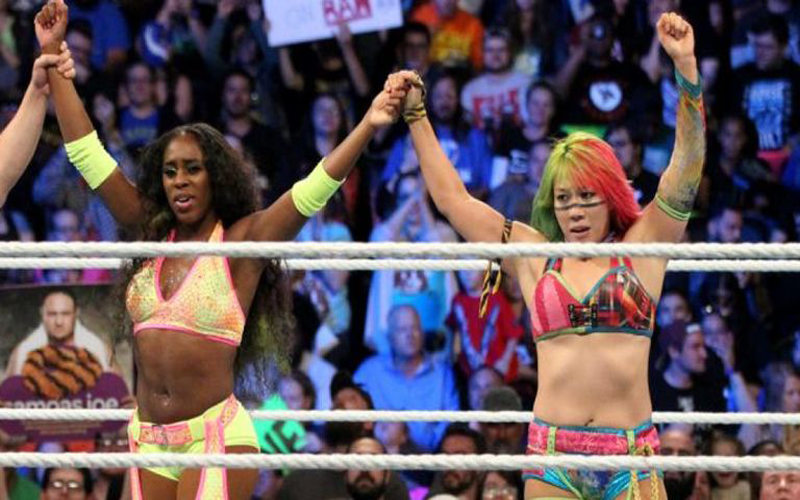 The women have most certainly been on their own path of Evolution over the past few years in WWE and around the world. With WWE set to hold the first-ever all-women’s PPV this weekend in Uniondale, New York, yet another ‘first’ will be crossed off the list.

One ‘first’ that hasn’t yet been fulfilled in the modern day is Women’s Tag Team Championships for both RAW and SmackDown Live. With an increasing roster of women and young individuals watching at home for guidance, there has never been a better time for the proverbial titles to be introduced.

SmackDown Live Superstar Naomi was recently interviewed by Landon Buford for The Hype Magazine, where she discussed wanting to team with Asuka and capture the proverbial Women’s Tag Team Championship for SmackDown.

Given the ongoing rumors are true, Naomi confirms she would love to have the titles introduced. She is married to Jimmy Uso- a tag team specialist. The Superstar believes this would help her get a kickstart in the division.

“I’m so ready for it, tag teaming is so exciting, and It’ll be great for the division because it will give us another championship to fight for which we need. Being married to a tag team specialist and in my opinion one of the best to ever do it I will have all the coaching and guidance I need to be the first to hold those titles.”

She also confirmed that she would want Asuka to be her partner.

“Asuka!  We have a lot in common surprising, and she’s just badass inside that ring point blank period. There are no holes in her game. If there’s anyone I could learn from grow with and dominate with it’s her.”

She also gave an insight into how she felt when she won the first-ever WrestleMania Women’s Battle Royal earlier this year.

“It’s hard to put in words all the feels and emotions.  It felt like I won the lottery. My name is now cemented in WWE history!  Years from now when I’m long gone, and there’s many more Women’s Wrestlemania Battle Royals people will remember the first and think of me.  It’s all very special to me.”

Naomi has also made it public that WWE never sent her the trophy she won from winning that match, so that likely dampened her long-term happiness with the victory.

Do you think Asuka & Naomi make a good tag team? Do you personally want Women’s Tag Team Championships to be introduced? Let us know your thoughts, opinions, and reactions in those comments below.

With H/T to The Hype Magazine for the transcription.