X-Pac opens today’s show by speaking about the NWA 70th anniversary show that occurred this past weekend. He notes that Willie Mack won the National Championship at that show, and X-Pac was thrilled to see that. He’s known Mack since Mack was a high school kid, and he points out that Mack had to overcome a lot of stuff to get where he is today. He’s proud of Mack, adding that he likes the look of the National Championship belt as well. 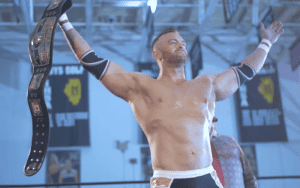 X-Pac ponders whether Mack might be a suitable challenger for Nick Aldis’ NWA Title. He points out that Mack needs to be a fighting champion who defends the National Championship now, so even though he might be a good challenger for Aldis down the road, that shouldn’t be the focus right now.

X-Pac points out that Sammy Guevara is an amazing performer, and he showed this again at NWA 70. He does point out that Guevara, like a lot of other performers, needs to be careful with how they approach their matches. He points out that when he was a young performer a veteran told him, “everyone knows you can shoot the gun, you can leave it in the holster now from time to time”, meaning that there was no need for high-risk bumps all the time.

X-Pac notes that Guevara started his match with a huge bump and almost didn’t land it. He points out that If you start like that and miss it, that’s a rough start.