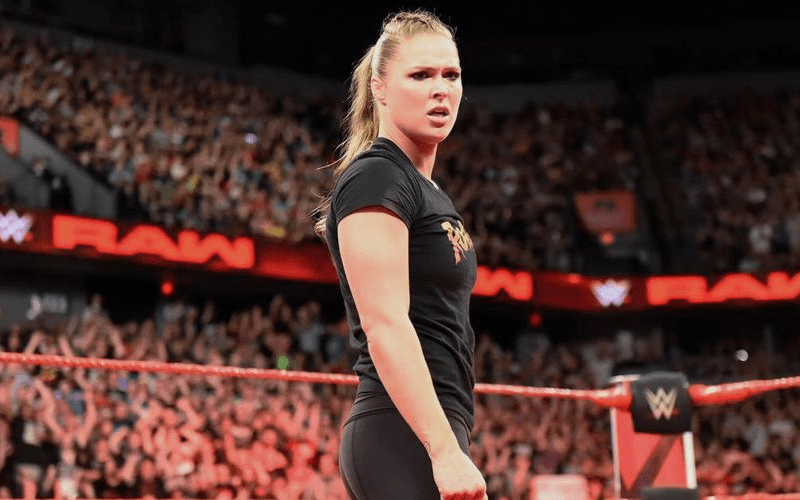 RAW Women’s Champion Ronda Rousey was recently interviewed by Refinery29, where she gave an insight into which Superstars have helped guide her in this transition from the UFC fighting style to her WWE style.

Rousey first explains how she grew up as a wrestling fan while suffering from a motor speech disorder known as apraxia.

“I have no idea how I became obsessed with wrestling as a kid. No one ever put it on TV as far as I know. I don’t remember ever seeing it on, but I was completely enthralled with Hulk Hogan, before I could even talk or say his name. I had a motor speech disorder as a kid called apraxia. I knew what I wanted to say, but when I spoke, I didn’t sound very intelligible. So, before I could even talk, I knew for my birthday I wanted a ‘Balgrin.’ It turned out that ‘Balgrin’ meant ‘Hulk Hogan.’ That was how I said ‘Hulk Hogan.’ My Hulk Hogan Wrestling Buddy was the only birthday present I wanted. I ripped his arm off a good 20 times, to the point that my mom was sewing it back on with dental floss. I didn’t want Barbies. I wanted to beat the crap out of Hulk Hogan…

“Once I got older and more into judo, I fell out of [wrestling]. I started doing MMA and I was trying to look at what the women weren’t doing that the men were doing, because they had good matches, but there wasn’t really any interest. I was trying figure out my plan of action for making women’s MMA take the world by storm, which was my great plan. There was no story in any of the matches. All you learned was that this person’s better than that other person. The fights needed to be made personal to the people sitting on the couch at home. I needed to figure out a way to be a polarizing figure. I needed to figure out a way that that match on the TV screen incited debate in everyone’s living room. I needed it to mean more than like, ‘That girl’s better than that other girl.’ So I was trying to think, Okay, how can I be a heel? Who are the greatest heels of all time? And Rowdy Roddy Piper was my favorite, so I studied up on him. I watched everything that he did to drive people into that prematch fervor. He was so great at promoting, and the women in MMA at the time were really missing that promoting aspect, so I tried to steal from him as much as I could.

“It’s kind of funny — it’s not like I was born into all of this. I just kept getting hints from the world that this was meant to happen. It was at WrestleMania 31 that I got an opportunity to show up and do a little cameo. I was like, ‘Oh, that was really cool,’ but I never thought that it would be an ongoing career move. It’s such a specialized skill that takes so many years to learn that I thought that I didn’t have the years to spare to spend on it, so it was just kind of like, I can check it off the bucket list. It wasn’t until I started planning to have a family with my husband that we were thinking, ‘Okay, what are all the things that we would want to do before we settle down and have a family? Is there anything we left undone?’ And I thought, You know what? I would love to go and be a WWE Superstar. Let me go and do this for like a couple months.’ But when I approached [WWE] with that, they were like, ‘Well, we would actually like to have you around for more than just a few months.’ I thought that I would be done by now, honestly, so this has organically blossomed into so much more than me or anyone else dreamed it could be.”

Rousey confirmed that Superstars such as Natalya, Brian Kendrick, Sasha Banks, Bayley, and Nia Jax have all helped her kickstart her WWE career in different ways.
.

“It’s hard to pick one person, because every single person on the roster has been a teacher to me at some point. I’ve learned something from everyone. Nattie’s been amazing to me from day one, when I was just training with Brian Kendrick in secret. Nattie knew I was training and she had just finished a South America tour. She had been all over the place, and instead of coming home, she flew all the way out to L.A. and stayed at my house and came to train with me. Now that I’ve been traveling around with them, I’m like, ‘How could you ever have taken some of your home days and spend them on me?’

“[WWE Superstars] Sasha [Banks] and Bayley have taught me so much. [They] have been these great examples of being effortlessly great at what they do. They’ve also been a great resource and made me feel so comfortable about coming to them and asking them questions. I’ve learned so much from every woman that I’ve ever been in the ring with. Nia Jax was my first singles match and if I didn’t have her as my partner, I don’t know if it would have been as good as it was. It was extremely intimidating that my first ever singles match was for the Raw Women’s Championship and she was just a great mentor and guide through that whole process. The people you are against [are the ones] you spend the most time with and you learn the most from. There isn’t a single woman in the locker room that hasn’t been instrumental to my success.”

Rousey also explained what her big goal in WWE is.

“We’ve never had women headline WrestleMania and I would love to be one of the women to do so, or at least be one of the women watching when it happens. It’s that one ‘first’ that has still been kept away from us that every single woman on the roster is ravenous for.”

Rousey is scheduled to face Nikki Bella this weekend at Evolution in Uniondale, New York, as she defends her RAW Women’s Championship.

Do you think Rousey will be one of the first women to main event WrestleMania? Do you feel she has been improving? Let us know your thoughts, opinions, and reactions in those comments below.

With H/T to Refinery29 for the transcription.