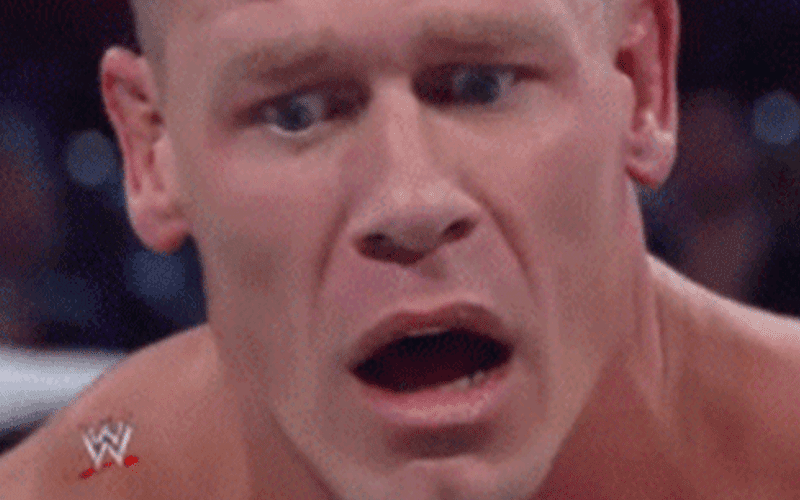 John Cena is in a very interesting position as WWE Crown Jewel approaches and WWE still keeps plugging the fact that he’ll be participating in the World Cup Tournament. He reportedly told WWE creative that he won’t be coming so they know… they’re just ignoring it for some reason.

Wrestle Votes commented that a source told him that John Cena could have reconsidered his decision to pull out of the Saudi Arabia show. He is a big movie star at this point, and his rep might be hurt by going to Saudi Arabia, but only time will tell if he actually gets on the plane.

But if you were wondering why Kurt Angle said his name anyway, it’s not because it was pretaped and they couldn’t change it because although it was pre-taped, WWE knew that Cena said he wasn’t going already. They just carried on with business as usual.

Still, another answer might be because WWE is moving the Crown Jewel event. Tickets don’t go on sale until the day-of the event in Saudi Arabia, but it still makes us wonder when they could be booking this event for and where if they expect to fill up any arena of their choice anyway.

Another option might just see the Crown Jewel show fall apart which would be very sad to see happen to a card that WWE has worked so hard to get together. If anything, Brock Lesnar and Shawn Michaels might even be out of the equation if the Saudi Arabian money isn’t there. But apparently, neither will John Cena if they keep the event as scheduled.

It’s always possible that WWE offered Cena a ton of money or he reconsidered after Roman Reigns’ leukemia announcement. But we will keep you updated as more information is known in this ongoing situation.

I don’t know how or when, but John Cena has told WWE he won’t be appearing at Crown Jewel. I’ve heard the show is back in “wait and see mode.” This is a mess. https://t.co/qaIC9jvv6N

Asked why Cena still appeared in World Cup promos last night, source said could be because they’d like Cena to reconsider his decision (🤔), or if they end up moving locations, he would end up being apart of the event.