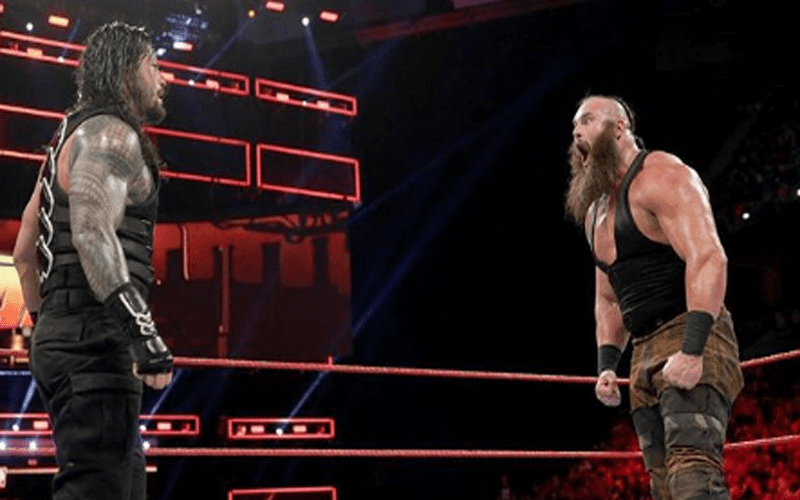 Roman Reigns publicly revealed during RAW last night that he has leukemia and will undergo the battle of a lifetime, ensuring he will be back in the future. Reigns would go on to relinquish the WWE Universal Championship, heading to the back to say his goodbyes before leaving the arena.

One notable name present in the footage WWE took was Braun Strowman, who is arguably one of, if not the biggest consistent threat Reigns has dealt with in WWE over the past year or so. The two hugged and exchanged words of encouragement, as Reigns moved to say goodbye to everyone before leaving.

Following this, Strowman took to his Instagram account, which is under his real name of Adam Scherr. There, he showcased a photo of he and Reigns fighting (see cover), and added a passionate message to his rival ahead of this traumatic journey Reigns is about to embark on.

Strowman made the following passionate comment on Reigns and his upcoming journey:

“I’ve been in many wars with this man. He’s been my biggest rival on tv!!!! But behind the scenes, he’s one of my closest friends!!!! He’s is one of the toughest men I’ve ever met and I have no doubt he’ll kick leukemia’s ass and be back to battling with me soon and I can’t wait. You and your family are in my prayers. Love you Big UCE!!!!! #FUCancer”

This was also accompanied by a plethora of supportive fan comments thanking Strowman and wishing Reigns the best of luck in his battle.

Stay tuned to Ringside News for further developments on Reigns.

What was your reaction to the news? What Reigns moment most stands out to you? Let us know your thoughts, opinions, and reactions in those comments below.