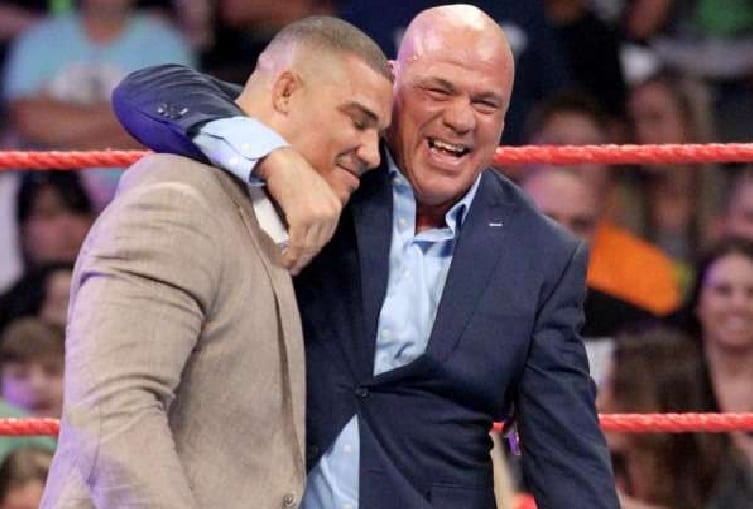 Everyone was wondering what WWE was planning when Kurt Angle announced that his big secret was that he fathered a child while in college and that his illegitimate son happened to be a WWE Superstar — Jason Jordan. This storyline not only pulled Jordan from SmackDown and ended American Alpha, but it was also one of the biggest head-scratching moments since the last time WWE announced someone had an illegitimate son.

Jon Robinson received amazing access to WWE through WrestleMania 34 as he wrote the book “Creating the Mania: An Inside Look at How WrestleMania Comes to Life.” He was recently a guest on the Smark to Death podcast where he revealed something very interesting that WWE had planned for the father/son angle at

“They were really gonna do Kurt Angle vs Jason Jordan and this was gonna put Jason Jordan over huge and make him a top star. Then Jason Jordan gets injured, that’s another big change. Then what do you do with Kurt? Then obviously he gets thrown into an even bigger match.”

“It’s crazy to see everything change from what I’m being told, to watching the show, then going back and talking to them again. Having that kind of access was incredible, especially for someone like me who has been a huge fan since I was a little kid.”

So apparently, Angle was supposed to face his son, only Jason Jordan got injured and he hasn’t wrestled since. Only time will tell if WWE will ever reintroduce Jordan or even mention the fact that Angle’s son is the former American Alpha member. But it could have been a great launching pad for Jason, if only he hadn’t went down with an injury.