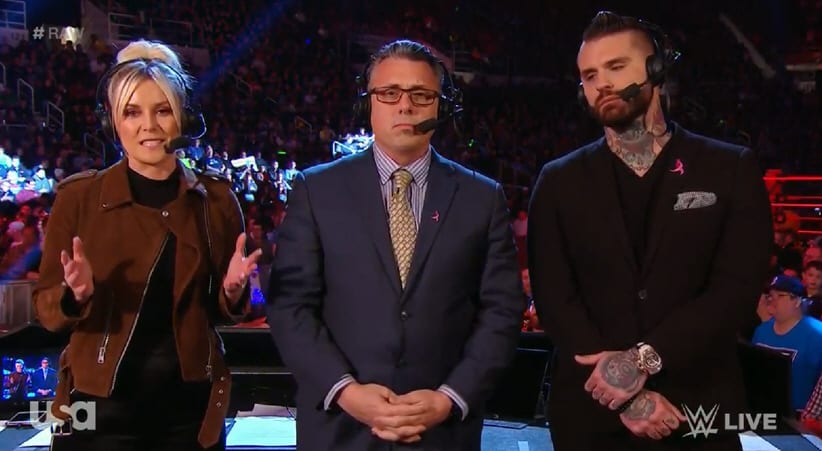 Roman Reigns started off Raw this week with a tragic, sad, and unexpected announcement. He was in street clothes and apologized straight away for letting the WWE Universe down. He said he wanted to be a fighting champion, but now he has to fight something else — leukemia and he will beat it.

But Reigns was forced to relinquish his WWE Universal Championship in the meantime.  Reigns said this is in no way a retirement, but he’s going home to fight disease that he first encountered 11 years ago.

When they shot back to the announce desk, Michael Cole, Renee Young, and Corey Graves all had a chance to speak about what just happened. Cole was professional and although shaken up, he read his lines as scripted and didn’t break.

But when Renee Young spoke, she acknowledged that Reigns is close with her husband, which is the closest they’ve come on Raw to disclosing that she’s married to Dean Ambrose — but she was holding back tears and her voice was a bit shakey.

Corey Graves had a chance to speak as well and he was choked up as well. He spent a lot of time with Reigns in FCW and NXT before Reigns went to the main roster and he also understands having to stop your career due to circumstances out of your control.

It’s understandable why they were emotional, after all, it was one of the heaviest moments on Raw in a very long time. But they were able to maintain their professionalism and carry on through that tough situation and they were tasked to commentate on it.