Bliss informs that she’s very socially awkward when she’s in a group of people. In a one-on-one situation she’s very talkative, but once another person is added to the conversation she finds it very difficult. She notes that she was an only child, and perhaps that has something to do with the way she reacts in certain social situations nowadays. 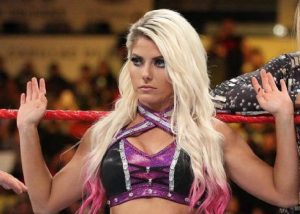 Bliss informs that she struggled with anorexia years ago, and she was down to 90 lbs at one point. When she was hospitalized she was apparently 2 days away from dying. She was hooked up to feeding tubes and was in very rough shape, and a heart-to-heart conversation with her friend really helped her get through that. Now she hopes to help young people struggling with eating disorders by discussing her past.

She mentions that it’s very difficult to eat clean and healthy on the road. There are some days when she has to ask herself if she’s eaten yet, and she needs to make it a priority to make herself eat. She adds that sometimes she just isn’t happy with her body and that’s why she wears a shirt to the ring on occasion; she thinks that’s a much healthier way to deal with her struggles. The fact that it helps her promote her merchandise is a factor as well of course.