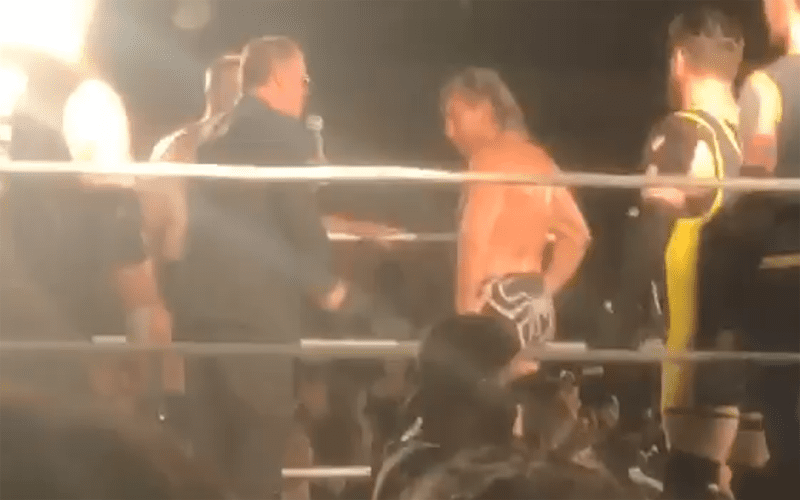 IWGP Heavyweight Champion Kenny Omega made an appearance for Premier Championship Wrestling (PCW) in Winnipeg last night for their “The One” show. Don Callis, despite being on rocky terms with New Japan, was also present at the show.

Despite Callis reportedly being a fan of Omega, the Impact Wrestling executive shocked the audience last night as he got on the microphone and cut a promo against Omega. He claimed Omega only eventually won the Championship because his stock rose through his match with Callis’ friend Chris Jericho.

Callis had the following to say to Omega:

“Six-star match? You and I both know that Okada carried you. Let’s just be clear about one thing, ’cause it doesn’t get reported. The only reason you got that shot at Okada where you won the title was because I got MY friend Chris Jericho to agree to wrestle you. Otherwise, you were gonna be gone! You’re welcome, Kenny.

“And here’s the worst thing you’ve done. You’ve taken all your talent and all your fame and your IWGP title and what do you do on the one day off you have? You come to a second-rate dive bar with a bunch of losers from Winnipeg. What kind of an IWGP Champion wrestles in front of a bunch of unemployed loser marks on his day off?”

After this, Callis attacked Omega from behind as numerous other wrestlers took to fighting off Omega and those attempting to protect him.

Omega would take to his Twitter account to claim he will see Callis on the Chris Jericho Cruise, which explains why the segment had taken place in the first place.

With the cruise set to take off on October 27, the match is just days away. Given that Callis was not scheduled to be involved in a match, it is unknown how his inclusion in the event will involve Omega. It is expected Callis could call commentary and have some involvement that way.

During the show, Jericho is scheduled to team alongside The Young Bucks against Omega, Marty Scurll and the NWA Worlds Heavyweight Champion and IWGP United States Champion Cody Rhodes.

Which team do you expect will be victorious? What are your thoughts on the Callis promo on Omega? Let us know your thoughts, opinions, and reactions down in the comments below.