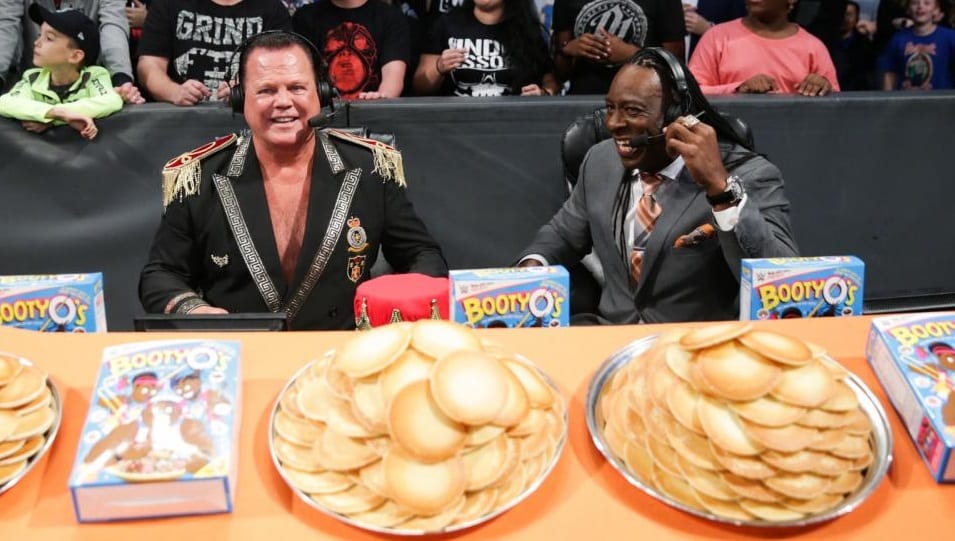 SmackDown 1000 was a fun night and we saw some legends that we don’t see every week. One notable segment came when Jerry “The King” Lawler and Booker T joined the commentary on a table made up to look like The New Day sponsored it. The plan was to cut to Booker and King talking about the match like they were doing commentary that whole time without anyone listening.
But Booker T explained on Heated Conversations With Booker T that the reason this segment wasn’t pulled off too well on camera was not only due to technical difficulties, but the 5x World Champion learned about this segment the day of the show when he arrived in the building.

“My thing is when I do stuff like that I like to be prepared for it. I like to know at least a couple of days before especially if I’m going to be on the table. Even if it’s just one match I still like to be prepared for it. Then I went into that thing totally unprepared — cold not knowing, working with King […] that’s the first time we’ve ever done anything like that.”
“It is crazy when we first started King’s earpiece wasn’t on, you know. It was crazy because I’m standing right next to him going ‘King what do you think about this?’ and he goes….. [mouthing ‘I can’t hear you’]”
“I look at him and I go, ‘But I’m sitting right here,’ you know so it’s the only way he could hear me it’s like he needed a hearing aid or something like no matter if your mic is on or not it still might be coming on the air. So I’m sitting there and going crazy because of the technical difficulty. It was crazy — it was live. The guys kept doing their thing and you just had to follow along and for me being in that situation was a precious situation. I was glad to be there, man.”

So if you were watching SmackDown 1000 and noticed Jerry Lawler need some coaxing to start his lines, then that’s why — because he couldn’t hear. In a situation like SmackDown 1000, when it’s live they had to roll on and make it work. But perhaps if they had some time to plan in advance they wouldn’t have had those issues.
If you use our quotes credit Ringside News