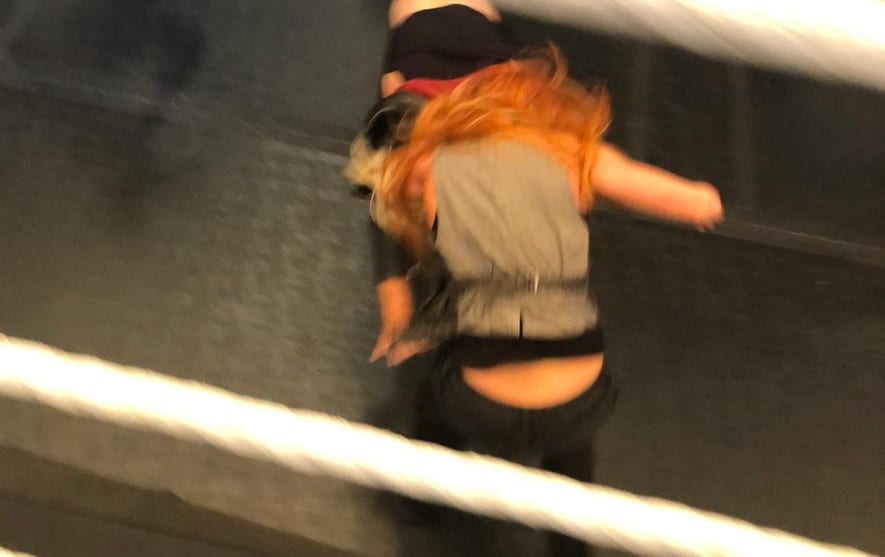 Becky Lynch and Charlotte Flair are set to face each other at WWE Evolution in WWE’s first-ever all-female pay-per-view in the very first last woman standing match in WWE history as well. The two old friends can’t wait to get their hands on each other and apparently, things came to a boiling point in an unexpected location.

Charlotte Flair went to the WWE Performance Center to speak to the female talent in NXT. She had time to hang out and answer some questions and she addressed the room as a whole. Then the event took a turn for the brutal.

Becky Lynch was apparently there as well and a brawl ensued. There is apparently video footage of this fight — we see the camera guy right there! But WWE hasn’t released it yet which is interesting.

NXT’s official Twitter account simply tweeted out saying: “There was a physical altercation between @BeckyLynchWWE and @MsCharlotteWWE at the @WWEPerformCtr yesterday morning. @WWE and #SDLive officials are investigating the matter.”

Only time will tell what will happen next, but it could lead to a change of plans if some kind of punishment is handed down. If anything it adds even more fuel to the fire as Lynch and Flair face off once again on October 28th.

There was a physical altercation between @BeckyLynchWWE and @MsCharlotteWWE at the @WWEPerformCtr yesterday morning. @WWE and #SDLive officials are investigating the matter. pic.twitter.com/q275mHpZNC