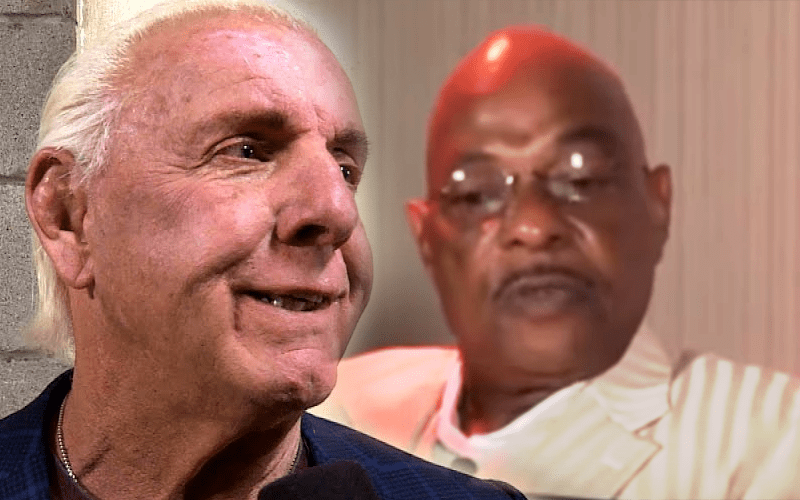 Ric Flair is a 2-time WWE Hall Of Famer and it’s hard to argue that the Nature Boy isn’t one of the greatest of all time. But another WWE Hall Of Famer might not have the best memories of the 16x World Champion.

Teddy Long was asked during a YouShoot interview about racism he encountered in the business and he started telling one story after another of a wrestling legend who treated him unfairly because of his race. He wasn’t shy about being honest about his experiences in the wrestling business.

He called out Ole Anderson who “was a bad man even if he knew your name he would call you a n*gger, he didn’t care.” He also said Superstar Bill Dundee called him the N-Word in front of an audience full of people. But it was the stories he told about Ric Flair certainly caught our attention.

“Ric Flair walked up to me one time and asked me, he said, ‘N*gger you like working here?’ I didn’t know what the deal was and this was Knoxville, Tennessee he said there were some girls at the back door and they were trying to get in and they told him that I said that they could come in.”

Teddy said he was hurt because it seemed like Flair was trying to take away his income when he was just trying to feed his family. It seems like time might not have healed this either as Long said they have been in the same situations on occasion since then and although he’s friendly if needed, he doesn’t think The Nature Boy’s mindset has changed.

“I don’t think it ever changed. I mean me and him have talked since then you know if he speaks to me I’ll speak to him, you know what I’m saying? If he doesn’t speak to me, I don’t speak to him.”

Long also said that Kevin Sullivan and Eddie Gilbert told him that Ric Flair hated the idea of him becoming a manager. He was also told by Jim Herd that Ric Flair just doesn’t like him. Of course, Teddy Long became an incredible manager followed by an even better General Manager which led him to the WWE Hall Of Fame.