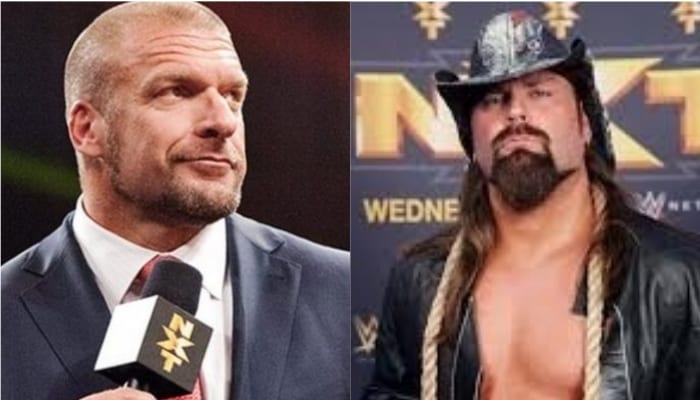 James Storm is the kind of guy who can play just about any part he’s given in a pro wrestling ring. But he’s taking his time getting to WWE. Actually, there was a time when Storm was in NXT and he was very close to coming aboard on a permanent basis, but it was wise words from Triple H that encouraged him to re-sign with Impact Wrestling in 2015 and take the guaranteed money instead.

Storm was recently a guest on I Left My Wallet in Greg Polanco where he explained how he had a heart-to-heart after the NXT taping he attended with Triple H, who he called Hunter. In the end, Storm didn’t end up signing the deal with WWE and went back to TNA only to have Bobby Roode take a deal instead to prematurely end a Beer Money reunion.

“I went over and I talked to him and I told him the whole situation and like he wanted me to sign. He said, ‘Look, I think we can really do something with you because not only can you wrestle but you’re a great character. You know wrestling is this thing, but those characters — everybody just wants to be the tough guy now. You know, yeah that’s what I grew up on.”

“It was one of those things where I just told him, ‘Look this is my situation.’ He told me the areas NXT was going to run and he told me, ‘We’re going to run between 100-130 dates for NXT. But you being who you are, I don’t see you being here that long because you’ll probably be called up. But that’s not up to me. That’s something The Old Man and that’s his deal. I would love to have you here I think you could help out especially these younger guys.’ I told him the deal that TNA was offering me and that me and my wife were trying to have another kid basically and it was one of those things where she had to do the shots so you have to have the shots and then you had to have sex when the moon was touching the sand and all this other crap and whatever.”

“It was basically, he was straight up with me. He was like one of the boys, he wasn’t the Boss Man. Because I know the first time I was there they just asked me to tighten up a little bit and I was like, ‘Okay, that’s no problem,’ and when I went back I had lost 19 from my first match there to my 2nd match there because I had motivation.”

“It was one of those things because Hunter straight-up told me, he said: ‘Look take the TNA deal. That’s guaranteed money and that’s a lot of it. I can’t tell a guy with a family to pass up guaranteed money. That just wouldn’t be right of me because if I were in your shoes, if someone offered me a good chunk of guaranteed money it would be a no-brainer I would take it. Take that, stay there for 2 years and then get yourself in the best shape you can and then call me back and let’s see if we can do business.’ So I was like, ‘Alright!'”

Perhaps Storm will get another chance because he’s in the best shape of his life at this point and only looking better every day. He’s staying very busy as well working the indie wrestling scene. But it just didn’t work out in 2015 and he largely has Triple H to thank for that decision as Storm remains happy, working, and waiting for another call from WWE.