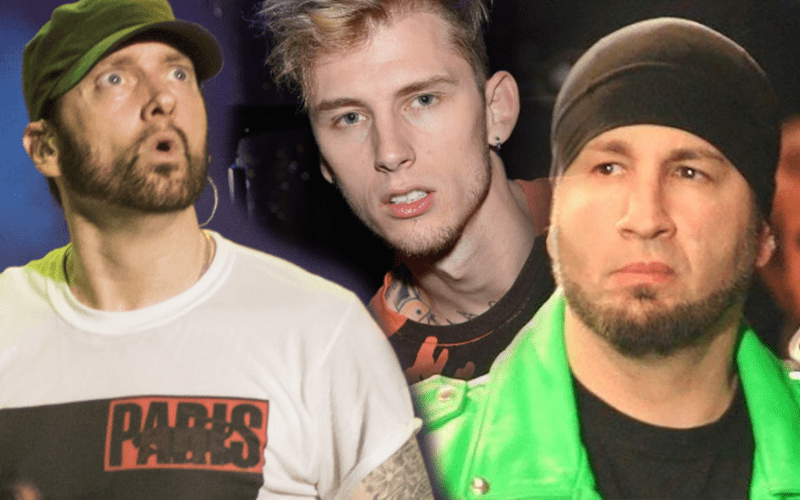 Eminem and Machine Gun Kelly have a pretty heated beef with each other that was started after MGK made a comment about Slim Shady’s daughter and then it snowballed from there. The two have recently released diss tracks at each other and we’ve heard both of them. We’re not going to give our opinion here about who won… but it’s not hard to figure out if you listen to both songs.

Hurricane Helms is apparently a big fan of Eminem’s and he’s willing to defend Marshall Mathers, even if one of his fellow wrestlers decides he wants to place his allegiance on the other side. Needless to say, someone needs to make a montage video of Hurricane Helms with “My Hero” as the soundtrack.

Mike Kanellis announced that he was on Machine Gun Kelly’s side and that’s all it took because he needed to stand back for a Hurricane coming his way. Helms told Kanellis to delete his Twitter.

It didn’t stop there because a couple of fans were apparently triggered by Hurricane’s remark. Obviously, they were on MGK’s side as well. So it looks like Hurricane might have his work cut out for him as his timeline is filled with differing opinions for a bit. Although he did advise to not be hateful about it because it’s all in fun. Let’s hope they take his veteran advice.

Gotcha. Don’t be hateful though. It’s all fun.

To Kanellis’ credit, he tried to further explain his decision to support MGK because it was a young guy going after a veteran of the game which he appreciates. So it looks like he’ll keep rooting for Machine Gun Kelly’s song because it felt more like a pro wrestling promo to him. Fair point, because most wrestling promos take a handful of writers to get just right too.