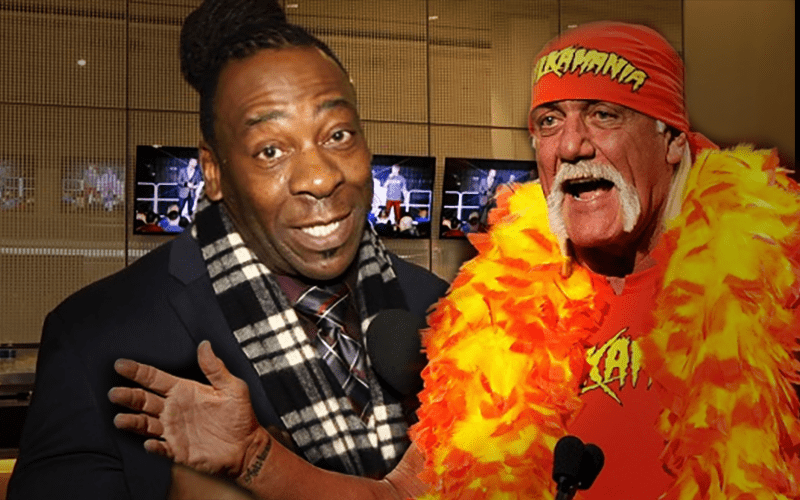 Despite the relationship between WWE and Hulk Hogan improving within the past few months, not everyone has forgiven the icon for his derogatory remarks from a leaked sex tape that found it’s way onto the internet a few years back.

With both Ric and Charlotte Flair now in question for supposedly using racist remarks, conversations have also circled back to Hogan, who still appears to deal with issues stemming from his remarks on the video.

WWE Hall of Famer Booker T was interviewed by Justin Barrasso over at Sports Illustrated, where he shockingly explained that he believes it is time to move on from Hogan’s controversy.

For further context, Booker notes that Hogan is going to have to live with these comments for the rest of his days. He also doesn’t know if WWE reinstating him was for the best, but at this point, there is no use for people to continue bringing it up if Hogan is truly sorry for his actions.

He had the following comments on the matter:

“There is not a building for the Hall of Fame, but the Hall is a very real thing. When guys get a chance to go on this journey and thank those fans for that ride, that’s extremely real. It means a lot for those of us who have gone on that journey, and Hogan is one of those guys who has gone on that journey. If people still judged me from what I did 30 years ago, I would not be where I am now. But someone, a guy by the name of Bruce Gasarch, trusted me.

“He said, ‘Man, I’m going to give you a chance.’ And that’s all I needed. Now I still have my broom, and I carry it around to sweep up all the dirt and trash I’ve left behind in my past. Hulk is also going to have to carry that broom in his back pocket and atone for his mistakes. That’s the only thing we can do as human beings. Was the reinstatement right, was it wrong? That’s always going to be up for debate, but I think it’s time to move on.”

Now to pass the question off to the readers, do you feel Hogan should be forgiven? Should this be let go? Leave your thoughts, opinions, and reactions in those comments below.