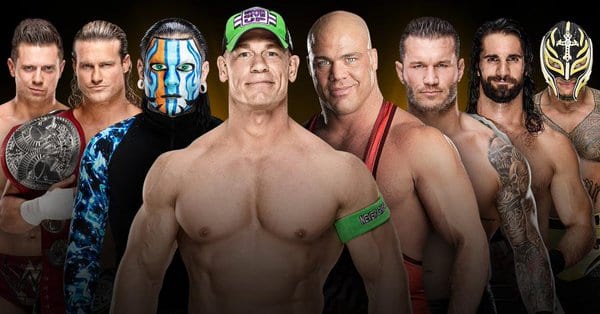 Saudi Arabia is hosting WWE’s Crown Jewel event. It can’t be stopped at this point except for a phone call from the White House to Titan Towers at this point. After all, the show was way too close when the huge controversy broke out. But they’re doing the show and the World Cup will be a part of it because the Crowned Prince Of Saudi Arabia, wants a World Cup because Qatar got one and they don’t like each other.

The field is set with 6 Americans which Rusev didn’t like at all. But with guys like Kurt Angle and John Cena in the tournament and knowing that they can’t take many bumps, it’s going to be interesting how WWE books this show. Angle might be able to still go, and so can Cena but neither should be willing to risk too much at this stage in their careers. After all, Cena didn’t even take one bit of punishment at Austalia’s Super Show-Down event because he was in the middle of filming Project X in China with Jackie Chan.

Dave Meltzer speculated on Wrestling Observer Radio that they could take out some of the veterans first and let the younger talent work more matches.

“They may get rid of those guys quick you know. John, they will probably get rid of with a fluke. Kurt, who knows?”

Odds are, if Angle is going to get eliminated it might as well because Baron Corbin screws him over. In all reality though, everyone in this tournament has a lot of years and championships to their careers which is why it is set to determine who the best in the world is.

But Crown Jewel already has 10 matches so none of the 7 matches in the tournament can really go very long at all.

Of course, Rey Mysterio is a wild card in this situation as he is everywhere else he’s a factor. Because he just returned and needs to get as much momentum as possible, after all, he’s still a huge draw but some newer audience members might have sadly never seen him work if they’re not keen on history or other promotions outside WWE.