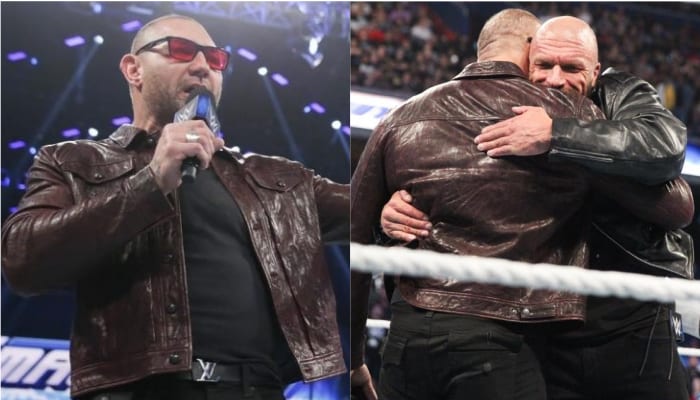 Batista returned to WWE this week on SmackDown 1000, but it was more of a pop-in to see some old friends in Evolution. Now it looks like WWE is teasing a match between Triple H and Batista in a big way which was something The Animal wanted to happen years ago as he took off as a box-office draw.

But as Dave Meltzer explained on Wrestling Observer Radio, how Batista might not even need to get physical before the big showdown with Triple H, whenever that happens. But, it might be interesting to see another veteran vs veteran marquee match at a major WWE event as they continue a current trend of stacking big shows around older talent.

“I don’t know how much he’s going to work. I don’t know the answer to that as far as if he’ll be around a lot or a little. He’s not booked on any other shows that I’m aware of at this point. He’s wanted to come back and work with Triple H, I mean that’s been his goal for years.”

“It’s a match and you know he’s 49-years-old, he’ll be 50 by the time Mania comes around. He’s in good shape, he trains hard but still he’s 50, he was not ever great. He was good, he was alright. You know with Bill Goldberg they kept it way short. I wouldn’t be too worried about it. I think him and Triple H who would be 49 at that point.”

So only time will tell what happens next in this scenario. But, if WWE continues their current booking plan of booking older talent for biggers shows instead of creating bigger and newer stars it looks like we’ll be getting Triple H vs Batista sometime in the not-too-distant future.