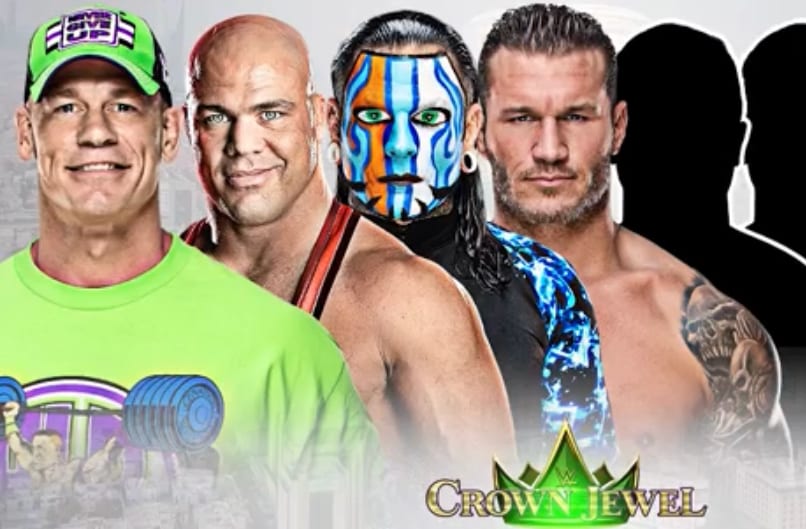 WWE is going to hold their Crown Jewel event whether it takes place in Saudi Arabia or not. But recent events like WWE scrubbing any mention of a Saudi Arabian location from their website, social media, and other places with an official statement, we can only wonder what they will do.

The World Cup tournament is set to take place at the Crown Jewel event and we’ve already seen 4 men qualify for the show including John Cena, Kurt Angle, Jeff Hardy, and Randy Orton. Cena qualified because he is John Cena and didn’t have to win a match. Kurt Angle snuck into a jobber battle royal where Baron Corbin was the only person who could have won and he took a Conquistador mask off and eliminated the acting Raw GM. Jeff Hardy “defeated” Samoa Joe when the referee called for the bell after Joe sold his knee too much. Finally, Randy Orton defeated the Big Show in Show’s first match back since his injury for a terrific homecoming for the star of Knucklehead.

This week on Raw, we still have planned for more qualifying matches including Drew McIntyre vs Seth Rollins and Dean Ambrose vs Dolph Ziggler. We also have the return of Rey Mysterio at SmackDown 1000 (yes, that’s this Tuesday) where Mr. 6-1-9 will face Shinsuke Nakamura in another qualifying match.

So whether WWE moves Crown Jewel or cancels the event, it appears that the World Cup tournament is still on in some form or fashion until they make some kind of official announcement.