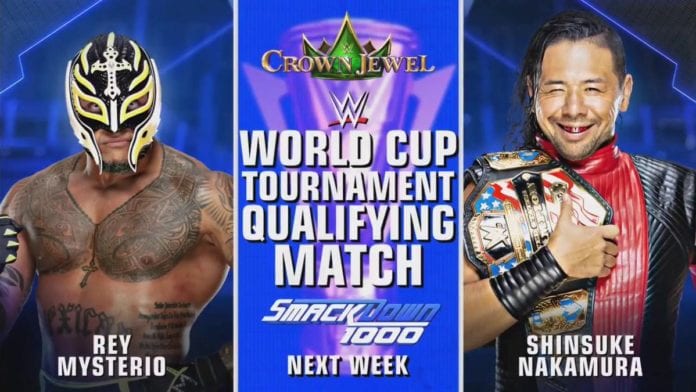 As seen on Sky Bet, the betting odds for Rey Mysterio vs Shinsuke Nakamura at SmackDown 1000 have been released.

The news broke earlier this week that Mr 619 himself would be returning to WWE on a full time basis, after much speculation over his future in professional wrestling. The former World Heavyweight Champion had been linked to a series of different promotions around the world, but now, it can safely be said that Rey will be a consistent member of the main roster for the foreseeable future.

As well as that, the bookmakers also seem to be fairly convinced that he’ll defeat The King of Strong Style on Tuesday night with odds of 1/7. Nakamura is, of course, the underdog at 4/1.

The match will be a World Cup qualifier, with the winner progressing to the tournament at WWE Crown Jewel. John Cena, Randy Orton, Kurt Angle and Jeff Hardy have already qualified, for what appears to be something of a ‘legends’ showdown.

Mysterio returned at the start of 2018 in the Royal Rumble match, with the fans giving him a triumphant reception in Philadelphia. Now, though, he’ll be forced to prove himself all over again given just how stacked the main roster is with top level talent.

Regardless of how long it took to get the deal done we’re all just happy to see Mysterio back, and given the odds at play, it seems incredibly likely that his fans will be celebrating a return victory after his big match against Nakamura next week.