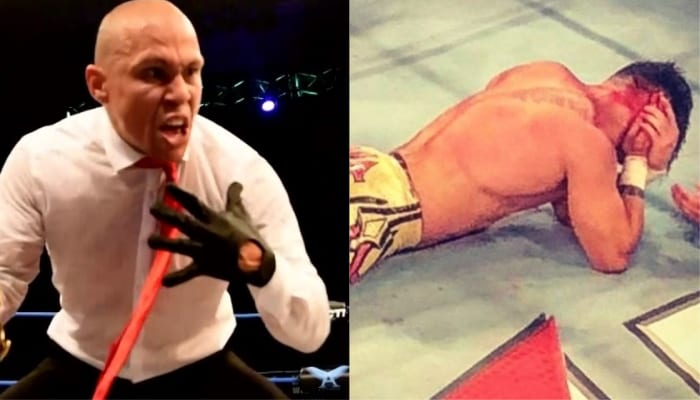 MLW is an indie wrestling company that isn’t afraid to take things to the limit. They have a television show on BeIN Sports and they really want people to watch. Therefore sometimes the action is quite attention-grabbing. They traveled to New York last night for a taping for their upcoming shows and recorded Fury Road and as you can see, things got out of hand.

Low-Ki, in an effort to show off his brutality took his aggressions out on Daga. The Professional actually defeated Daga by ripping off his ear in order to retain his MLW World Championship Title.

This is the kind of spot that we really don’t like seeing because now Daga and Mick Foley look like they have a lot in common. As the Lucha Underground star writhed in pain on the mat, he promised to get his revenge and sent out a social media update about how Low Ki is no Professional.

Now it looks like Tessa Blanchard, who is currently dating Daga will have one less ear to whisper sweet nothings into. But in reality, this spot was said to be crazy violent and unacceptable by some.

MLW officials said they are “reviewing” Low Ki’s conduct at this time so hopefully, something can be done. One thing is for sure that Daga wasn’t happy at all about how things went down in Chicago.