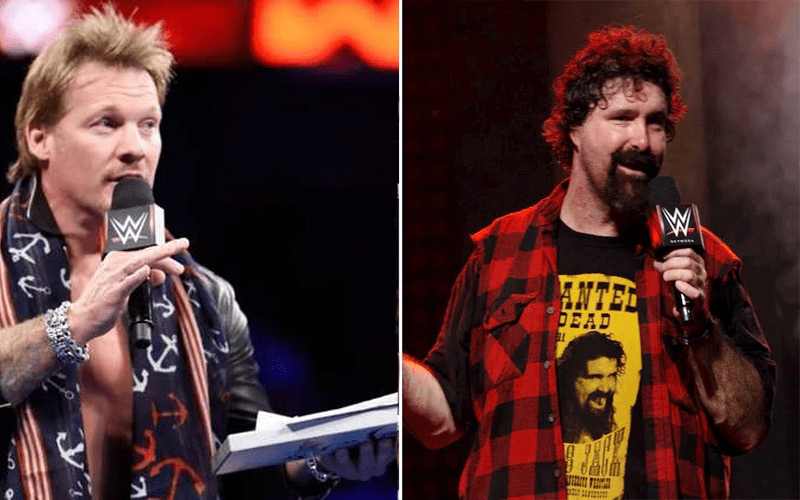 During his recent special on the WWE Network, former RAW General Manager Mick Foley was asked to comment on his favorite up-and-coming stars in WWE. While first answering the question, the former Champion decided to give the audience a lecture on why new talent should look up to Chris Jericho.

Foley started off by answering the question. He notes a few NXT and RAW Superstars in the process.

“I’ve been a fan of Tommaso Ciampa for a long time. I love what he and Gargano are doing. I love the fact that Ember Moon is creating eyeballs [on the product] right away. Just yesterday I was watching a replay of- I think Ronda Rousey is doing a tremendous job. I really do. She’s coming along really quickly. Part of what helps any babyface or good guy or woman along the way is a great heel, and I think that Alexa Bliss has developed into a great heel. I still admire Kevin Owens’ guts for going places as a heel that other heels won’t go. So when he was on top of the cell with Shane- Shane McMahon- the crisis of confidence of confidence when he was about to go but didn’t want to and he knows that some guys are so concerned about being the cool heel that they’re not willing to show fear, and Kevin will do whatever takes and he will turn any promo given to him into a work of art.”

Changing the question and conversation to that of a discussion, Foley explains what he admires about Jericho and why up-and-coming wrestlers should pay close attention to the Superstar.

“Although Jericho is not an up-and-comer by any means, I really admire the ways he is constantly evolving. I tell the younger up-and-coming wrestlers to watch Chris Jericho because he never relies on one thing too long. I’m proud to say I was the first person to be put on the list. I watched in the back as he was talking to Owens. He was like ‘I can’t stand Foley, you know what I’m gonna do? I am gonna…’ And a guy from catering walked by- I don’t know if it was planned or not, and he grabbed his notebook and he went ‘I’m gonna start a list,’ and he wrote down my name and I looked at whoever was next to me and I said ‘he’ll get that over in three weeks.’ He got a scarf over! He got the word ‘it’ over, simultaneously. So I really marvel at what he has done. I think everyone should look to him as an example of how to constantly evolve.”

You can watch the video with the highlight below:

Do you agree with Foley? Which upcoming stars do you like most? Let us know your thoughts, opinions, and reaction in those comments below.