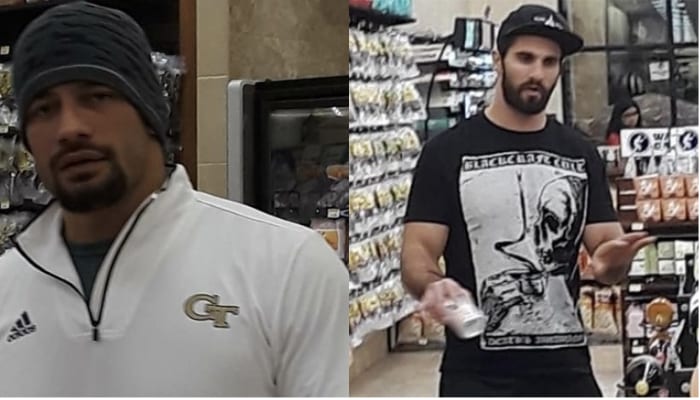 WWE Superstars are famous outside of the ring as well and they can probably expect to attract a certain amount of attention where ever they go. But apparently, Roman Reigns and Seth Rollins were recently approached in public and one fan didn’t have the best experience. In fact, he said they were “d*ck heads.”

One fan sent out a post this morning saying that her father met Reigns and Rollins in public and he didn’t have the best things to say about them. There is also photographic evidence of the encounter and neither Shield member appears to have a friendly expression on their face.

It’s easy to understand how Reigns and Rollins can become tired after so much time on the road, but they are also representing WWE at all times. For what it’s worth they both look very tired as well.

Hopefully, this was just her father catching Reigns and Rollins at a bad time, but as The Architect is surrounded by young fans in that one photo, it might not be out of the question that he didn’t have time for them to mark out on him.

She told her story in a series of tweets where Rollins brushed off the kids. But on the other hand, apparently, Braun Strowman and Alexa Bliss were nothing but nice to everyone they met.

My dad saw @WWERomanReigns & Seth Rollins at bucces the other night and he said they were dick heads. #shocker pic.twitter.com/BeXgJYLnkH

@WWERollins it looks like Seth is telling kids a story but no he’s telling them he will not take a quick pic with them. They were disappointed… after they just supported him …

@WWERomanReigns told my dad he wasn’t an animal In a cage and stop taking pics WHICH IS FUNNY considering he was in a cage match that night! #moron #ilikedyou

Thanks to Howieman43 on Reddit for pointing this one out