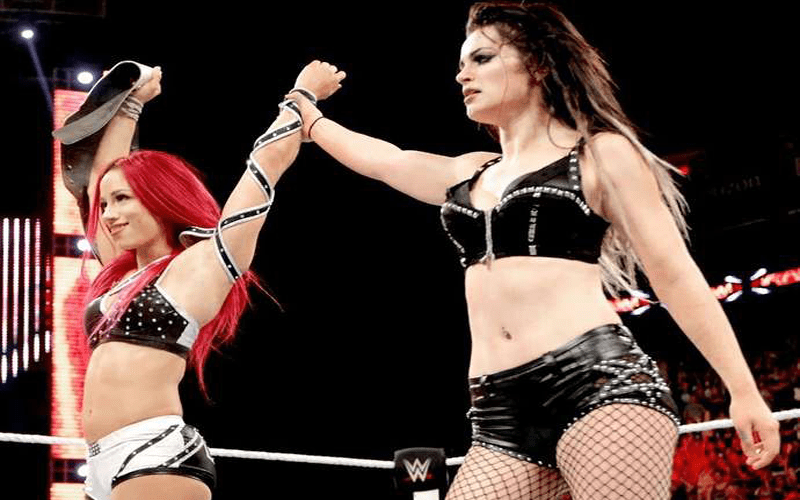 SmackDown General Manager Paige was forced to retire from in-ring competition not long after making her return to the ring and forming Absolution alongside Sonya Deville and Mandy Rose. This happened after the former Divas Champion took a kick from RAW Superstar Sasha Banks in the midst of a tag team bout at a live event back in December 2017.

In the video showcased below, a fan takes footage of the blow to the back of Paige by Banks. This is the move that caused Paige’s head to whiplash and ultimately almost paralyze her.

When approached by Give Me Sport to comment on her relationship with “The Boss” following that live event, Paige sought to fire back at the outrage throughout the internet and wrestling community at Banks for the incident- as she believes Banks was not at fault.

Here is what Paige had to say:

“Nothing was ever Sasha’s fault. She got so much backlash and even in the ring and we were in there, people are chanting ‘Sasha sucks’ and it really upset me to hear that because it wasn’t her fault.

“The thing is with me, right, that move where she kicks me in the back, I had taken that so many times previously that I was so stubborn and I thought ‘I can still do these kinds of things’ and I thought my neck was just as strong as it was before, but, unfortunately, it’s not.

“So I called this move and I told her to do it and so she did it, and unfortunately, my neck wasn’t strong enough and it snapped all the way back and it was essentially the same as having a really bad car crash – the whiplash was.

“The girls at the side of the ring were crying, Bayley was really upset and Sasha is sitting in the corner just devastated and I couldn’t cry at first; I wasn’t in any pain I was just in so much shock and I’m just looking at these girls like ‘oh my gosh. And I knew it, I felt it – my career was done.

“I remember them bringing out the stretcher and stuff like that and I was like ‘please don’t make me go out on a stretcher, that’s all I’m asking. I don’t wanna go out on a stretcher’. I wanted to walk out gracefully and I just knew I was going to get told I wasn’t going to be able to do this anymore.

“So I’m finally up and walking and the crowd are cheering – they were so sweet – so I get backstage and Jamie Noble and all the trainers and doctors that we had were checking my reflexes and my body felt fine after that, it was just achey.

“So then literally the next day I get flown out to Orlando to see a doctor,” Paige continued. “The next day after that I got flown out to Dr. Maroon. He felt my neck and he was like ‘You can have another surgery if you want, but you still have to retire, either way’. He was like ‘if you get hit again you’ll be paralyzed’ kind of the same as Edge and I already knew that. I was just hoping he would tell me something different.

“So getting back to work, I didn’t wanna tell anyone just yet. I was like ‘I’m fine, I just need a couple of weeks.’

“But, I remember just telling Sasha ‘I can’t wrestle anymore’ and she was devastated, she started crying, crying her eyes out. I was like ‘I’m so sorry’, I think it’s just a British thing to apologize! But I was like ‘I’m sorry, it’s not your fault’ and she’s just been so, so supportive. She always texts me like ‘hey, how are you doing, how things going?’ you know, and she’s just always been really great.”

While Paige has said in the past she hopes to find her way back in the ring again, her future as it pertains to in-ring performance appears to be bleak. With her comments, fans can be reminded that competitors put their bodies on the line each and every night and injuries do happen. Sadly, Paige was just one of many competitors to have career-ending injuries during the peak of their careers.

What is your favorite Paige memory from her time as an active competitor? Did you blame Banks, and do you still now, if you did? Let us know your thoughts, reactions and everything in between in those comments down below.