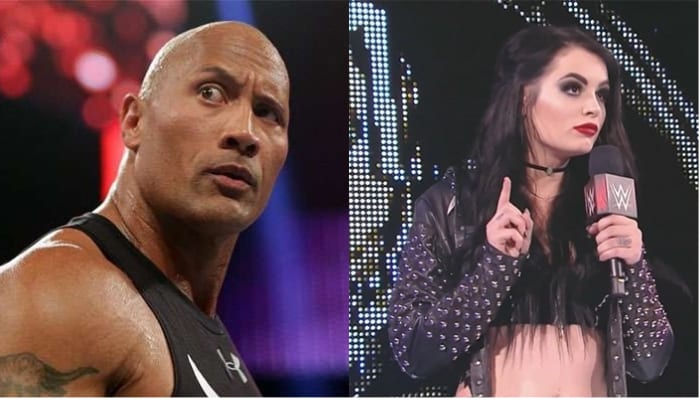 As the SmackDown Live GM spoke to The Sun, Paige explained how the movie came about and also revealed how shocked she was when The Great One approached her about the movie. She also didn’t realize that people who know Dwayne Johnson well call him by a different, more familiar name.

“I got told about the movie the day of WrestleMania before my debut on Raw. At Mania I got a text on my phone saying ‘Hey it’s DJ, I need to speak to you real quick. I’m like, ‘DJ, who is that?’

“I didn’t realise people called him that. I was sat next to Dean Malenko and asked who DJ was and he was like ‘It’s Dwayne Johnson you dummy!’ And I was like ‘Oh my god.’

“I was just an NXT girl at WrestleMania taking everything in and then all of a sudden I’ve got Dwayne Johnson asking if he can talk to me.”

“He then said ‘I’ve been in England filming Fast & Furious and I stumbled across your family documentary on TV. I saw it and thought that family is just like mine.”

“’You guys are very loyal and close and love the wrestling business. You are so passionate and it just touched my heart and I got goosebumps watching it. Then I realized the girl was in WWE, she was debuting tomorrow and she will be wearing the Diva’s Championship.’”

“He wanted to be the one to tell me and make it special – it was so overwhelming and I was blubbering everywhere thanking him for watching the documentary. And then he said he had something else to tell me. He said ‘I loved the documentary so much I want to make it into a movie’. And I was just like ‘what?'”

“That took me over the edge and I was crying my eyes out and thinking ‘what the f*ck is going on around here?’ He was so great, asking me not to tell anyone and to stay humble and hungry – he gave me wonderful advice. I was an emotional mess.”

Fighting With My Family is slated for a March 1st release next year. Hopefully, it will live up to the hype. If anything, it will be a great way to get a better chance to understand where Paige came from before starting her career as a WWE Superstar.