Hardy informs that he started in WWE in 1994 and he worked as an enhancement talent for a while. By the time he was 19 years old he was signed to the company so he literally grew up in there. That’s why it was so important and cool for him to return to WWE at WrestleMania 33. 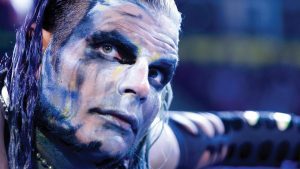 Garcia informs that she jumped up and screamed with the rest of the audience when Jeff and Matt returned at WrestleMania 33. Hardy informs that he was nervous prior to that match because he hadn’t jumped off a ladder that big in over a decade, and he was scared that something would go wrong. However, once he went through the curtain all the nerves went away and he knew that’s what he was born to do.

Hardy points out that hesitation is a killer when you plan out big high spots like that. He notes that when you picture something in your mind you just have to go for it and do it. A part of him loves the butterflies and nerves because when he does something successfully and comes out the other side uninjured, that makes the high so much better.