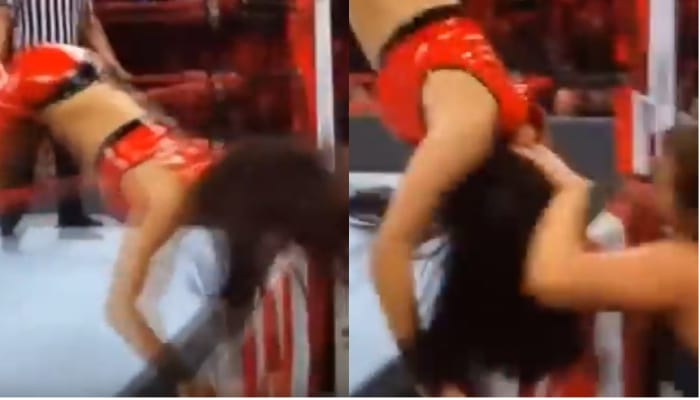 The Bella Twins returned to Raw to face The Riott Squad and during their match, Brie Bella took a rather scary dive that was a big botch… actually, she took two but it was the first one that was the scariest.

Bre Bella recently spoke to Yahoo Sports about several things including her future in the WWE where she said “I hope to be around for a bit.” But she made a special note to address her scary botched suicide dive on Raw during the Bella Twins’ return to the ring against the Riott Squad.

“With any type of physical body change, it changes so much. Even last week on ‘Raw’ when I did the suicide dive and it was less momentum than I should have had, I forgot that I’m 10 pounds heavier than what I was. Gravity doesn’t lie. That was a little different for me.”

“I don’t mind if I fail or if I succeed. No matter what, I want to look back with no regrets. If I fail, last week for example, I went to sleep at night and I was kind of bummed out, but I learned something about myself. I learned where my body is at, where I am at.”

Only time will tell if Bella will try and redeem herself at Hell In A Cell. After all, she has a great opportunity in a mixed tag match with her husband Daniel Bryan against The Miz and Maryse. Hopefully, she’ll play it safe though because whether or not she minds if she fails of succeeds, they call them “suicide dives” for a reason because they are incredibly dangerous.