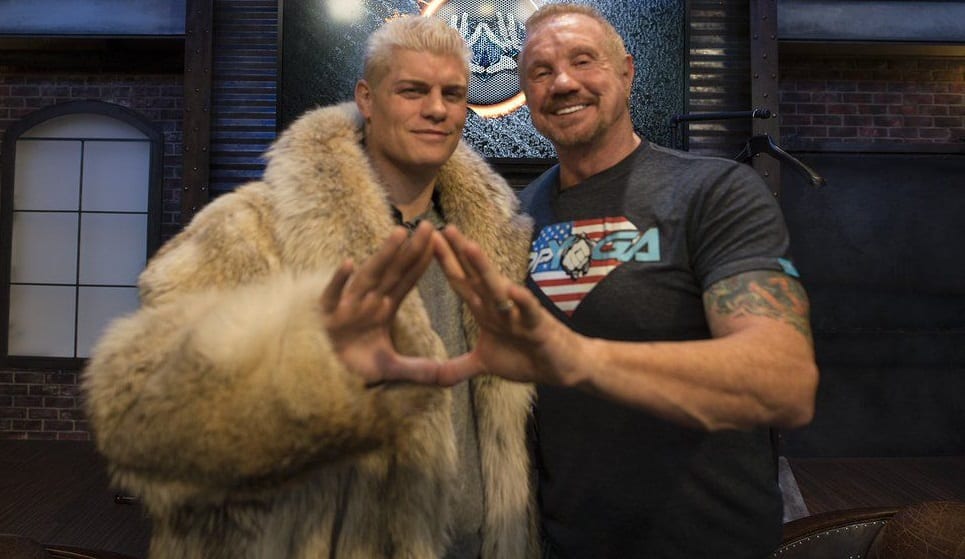 DDP explained that Dusty Rhodes was his mentor. While Page said he got the tryout himself, the next 3rd of his career was all thanks to The American Dream. He then said that is why it was such an important opportunity for him to walk Cody Rhodes out to the ring during his match at All In.

He explained how Rhodes yelled at him back in the day and told him that he should get out of the pro wrestling business if he didn’t think he could be the World Champion. At that time, DDP wrote down that he will be World Champion within 5 years and he made that happen in less than that time.

Page said that he was one of Cody’s favorite wrestlers and they would talk often as Rhodes grew up in the wrestling business. DDP said that he used to call Cody “Young Buck… what’s the odds of that? I mean all the time. I didn’t even call him Cody, I called him Young Buck.”

Cody told Page he wasn’t going to play football anymore after his sophomore year because he wanted to concentrate on wrestling. He said he wanted to become a state champion.

“I said, ‘Cody you think you learn anything from winning? No bro. You lose from losing, falling down. It’s okay to make mistakes. What did you learn from that?’ He wasn’t really hearing that until I said, ‘Would you have rather met him at 44-0 in the quarterfinals and had him slip over on you and you don’t even get to the finals? Right now you got one up on this guy. He thinks he beat you. He thinks he owns you… he doesn’t realize how you’re going to adapt from there.”

Rhodes did come back and DDP said it clicked with Rhodes to mess with his opponents in a much bigger way. He said in the finals, Cody requested that Dallas be down on the floor so he could watch the final match he faced the guy who previously defeated him and he won.

Dallas got emotional when he thought about Dusty Rhodes telling him that he was on his personal list of 5 friends and Cody told him the same thing after The American Dream passed away.

In the end, DDP admitted that he charges $10,000 to make appearances and hit the Diamond Cutter, but he didn’t charge Cody a dime to appear at All In.