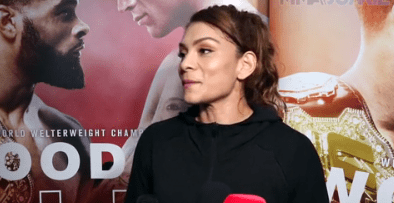 Nicco Montano won the inaugural women’s flyweight championship back in 2017 when she defeated Roxanne Modafferi in the finale of Ultimate Fighter 26. However, since her UFC 228 opponent Valentina Shevchenko transitioned from bantamweight to flyweight, MMA fans and experts have claimed that Nicco’s time as champion is running out. She’s a heavy betting odds underdog for Saturday against the much more experienced Shevchenko, but that doesn’t mean she’s going to allow that to effect her confidence.

As she told MMA Junkie at her open workout…

It’s always been that. I don’t have anything to compare it to because I’ve always been the underdog. So, it’s just part of who I am in spirit. I have nothing to prove and everything to gain. I’m the champ, but I didn’t spend my whole life trying to get this one thing. I spent my whole life fighting to be the best person that I can be, to be the person that my little sister can look up to and actually aspire to be instead of some random girl floating around, making a living just being who they think they should be, as opposed to who they actually can be.

It’s admirable to see Montano’s spirit, but will it last once she steps into the octagon against The Bullet? Either way, the co-headliner for 228 should be a doozy.