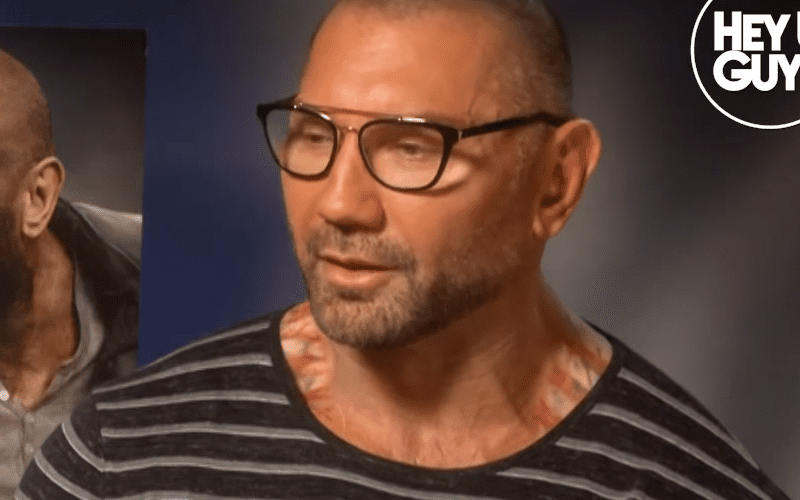 Batista was a recent guest on HeyUGuys to promote his new film Final Score. When the topic of James Gunn comes up, interviewer Stefan Pape asks the former WWE Superstar about his future with Disney and the MCU, and commends the Animal for sticking up for Gunn in the wake of his firing. Batista wasn’t shy of speaking his mind.

“At the same time it’s an integrity issue. It’s also a loyalty issue, so now I’m not going to, you know, I’m not gonna bite my tongue for anything, and that’s just who I am as a person. I’ve tried to actually, you know, be very choosy about what I say and the way I say it, I don’t necessarily mean to be disrespectful but at the same time I have to say what’s on my mind and in my heart, and so I’ve just been as honest what I’ve been and that’s just the way I live my life as an honest person.

Batista goes on to say that he doesn’t really care if he loses his job with Disney, and is willing to go back to wrestling, even if backyards, for money if he has to.

It just is what it is, if its enough to cost me a job and that’s just what happens. You can’t threaten a poor man with poverty.  You know I grew up poor.  I know what it’s like to be poor. I’m not afraid of losing money.  It means nothing to me. I will wrestle in backyards in front of ten people if I have to make a living, so I’m not going to be flexible with my integrity. I’m just going to speak my mind and try not to be disrespectful and that’s why I always say and I make sure that this is directed at certain people like, not Marvel.