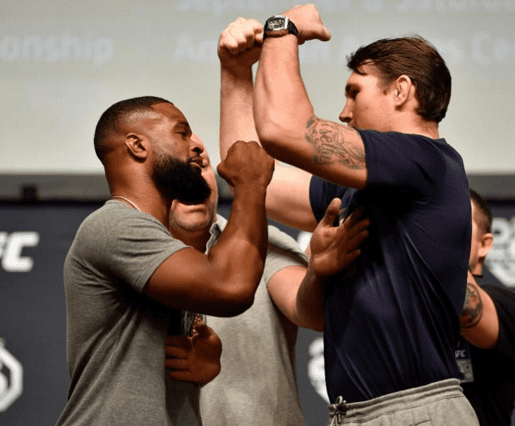 The UFC 228 main event is only six days away and the tensions between undefeated Darren Till and and welterweight champion Tyron Woodley are at an all-time high. During a recent interview with MMA Junkie the 36-year old was referenced as the second oldest UFC champion within the company today. While that information is true, The Chosen One wasn’t too happy about his age being used as a factor against the 25 year old Brit.

Till, who has a professional record of 17-0-1 continues to comment on his power and size over the champion. Woodley however, is unimpressed, and promises Till that it takes much more than an attitude and some confidence to sit atop the throne.

Confidence ain’t enough. Being tough ain’t enough. I want it just as much as he wants it. I don’t want to be a challenger again. You know, life as a champion and life as a challenger are two separate things. I want to continue to have a platform to use to inspire and motivate to do positive things with. I want to consistently be able to provide a lifestyle for my family, so they have opportunities that I didn’t have as a kid. And he wants to take that away from me. So now it’s on.