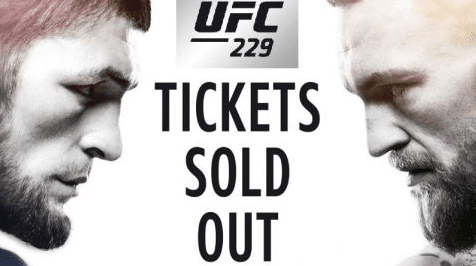 We just hit the one-year anniversary from Conor McGregor’s loss to Floyd Mayweather Jr. and many assumed that would effect the Notorious One’s MMA draw. That couldn’t be further from the truth. When McGregor was announced to finally step into the ring with current lightweight champion Khabib Nurmagomedov at UFC 229 tickets sold out in roughly three minutes at sky high prices.

Now, MMA Fighting is reporting that the event taking place this October at the T-Mobile Arena in Las Vegas has just become the second most in-demand ticket in UFC history. Tickets from all secondary markets like Stubhub or AXS are ranging in the thousands, mostly being bought up by Irish and Russian fight-goers as they are the home countries to Khabib and Conor.

As of now, the show’s gate is expected to break the Nevada UFC record, but fall just short of the 2016 Madison Square Garden showdown. On that night, Conor McGregor would defeat Eddie Alvarez by TKO.