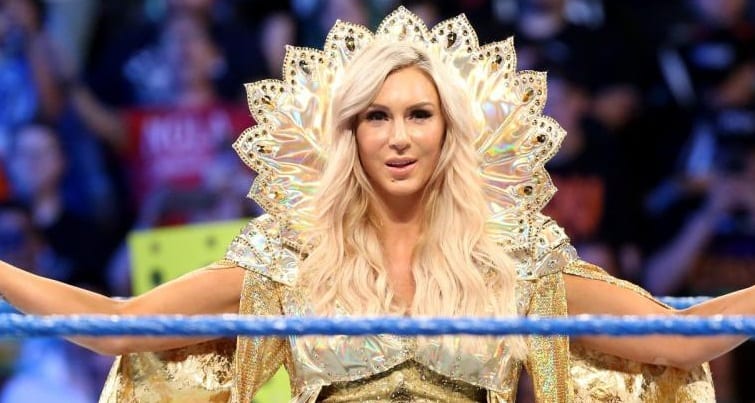 SmackDown Women’s Champion Charlotte Flair was a guest on Breakfast Television in Canada this morning ahead of SmackDown Live tonight. During her time on the show, Flair was asked to comment on Becky Lynch’s betrayal at SummerSlam, Ronda Rousey, Evolution and her father.

Flair first commented on the main topic at hand, and that is the betrayal of the woman she thought to be her best friend.

“Yeah, it only happened- what? A week ago? I guess you hit your friends harder, and I don’t understand how the opportunity was there and what kind of competitor would I be had I let her win. So I thought after the bell rang, it was all- everything is all [on the table], even though we are friends. Then that happened. I don’t know. It hasn’t really soaked in, cause it’s like- I traveled by myself this weekend before I was traveling with her. It’s hard, cause you want- she was my person that I shared my victories with and then the person- she was my best friend. Everyone knows that best friend that out of nowhere [that does that] you’re like ‘where did this come from? Why didn’t you tell me from day one?’”

On the same note, Flair was asked whether she believes Lynch wants the title.

“I mean, I guess I have what she wants. This is what I will defend, day in and day out. She will have to go through me, yeah.”

Flair was asked how she got into the wrestling industry, and if her dad ever persuaded her to join or prevent her from doing so.

“He just wanted to make sure that I worked as hard for this as I did for Volleyball that I played in college because this wasn’t something I grew up talking about. My little brother actually wanted to be just like my dad, and I actually got into WWE because of him. But when I said, ‘hey dad, I want to move to Florida and start in NXT,’ he was like ‘Oh my gosh, that’s great! But listen, you have to put as much dedication to this as you did everything else [like] sports growing up.’ I just don’t think he ever thought- since I didn’t talk about it- that it’s what I wanted to do, but then once I figured it out a year or two in- cause everyone thinks that ‘Oh your dad must’ve been hands on since day one,’ but he always believed that professional wrestling was something you needed to figure out on your own and you had to find the passion in. Now it’s cool to have that [relationship] where I can call my dad every night after work to ask him for advice.”

Commenting on both Evolution and Ronda Rousey, Flair was asked to explain what a potential match at the event between the two would be like.

“What makes Evolution such a big deal is that it’s the first-ever all-women’s PPV. It highlights the women from the past, the present and maybe the future. To say that the company believes in the women that much to give us an all-women’s PPV is an honor, and everyone should be extremely excited. But [in] saying that- Ronda Rousey is the new RAW Women’s Champion. When she first decided to be a part of our division, all I could think of is how much she legitimizes what we do because she’s an Olympian. To have her popularity and maybe outside recognition on our division- the people who weren’t aware of what the women in WWE were doing means everything. So I credit her, and I’m excited to see where her future goes. But if I’m facing her at Evolution, I have no idea [what to think].”

Finally, Flair commented on the announcement that SummerSlam is coming to Toronto in 2019.

“It’s like a mini WrestleMania. We have appearances all week. From Be A Star, Toys R Us signings- whether it’s media, whether it is community work in Toronto [with] local [organizations] for kids! Then we have TakeOver on Saturday, SummerSlam on Sunday, RAW on Monday and SmackDown on Tuesday. So WWE will be taking over Toronto!”

Do you believe Lynch will take the Championship from Flair? Would you be down for a Flair vs. Rousey match? Let us know in the comments below.