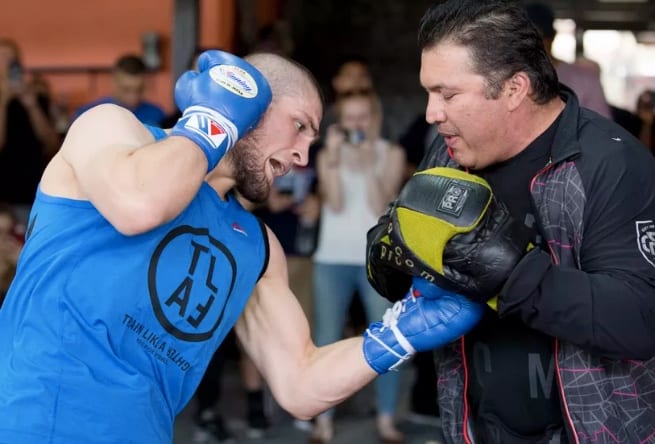 During a recent appearance on the Eurobash Podcast, American Kickboxing Academy head coach Javier Mendez revealed that he doesn’t believe there’s any way for him to prepare Khabib Nurmagomedov for Conor McGregor’s striking game.

The revelation may come as something of a surprise to some, whereas others will believe that the honesty is refreshing from a head coach. Below is a transcript from Mendez’s thoughts on the fight, courtesy of MMA Fighting.

There’s no amount of time that we have that’s going to help us to try and get him to stand up, there’s no way possible. So, I’m not gonna say, ‘Oh yeah, we’re gonna get him ready’… come on…wake up…it ain’t gonna work.

“We have to fight our strengths, we have to find ways of opening the doors to where his weaknesses are and likewise. This is basically the classic grappler versus striker fight. Keep in mind that they can both grapple and they can both strike, it’s just one is better than the other at (each discipline).

A lot of fans will suggest that The Irishman also won’t be able to prepare for Khabib’s grappling in response, which is what makes this such an interesting contest. We’ve seen McGregor being submitted on the ground before, and in the same way that it only takes one punch to change a fight, it only takes one mistake to allow The Eagle to go for a submission.

Conor and Khabib will square off for the UFC Lightweight Championship at UFC 229, with the winner likely going on to face the always unorthodox Tony Ferguson – if El Cucuy is able to get past Anthony Pettis.