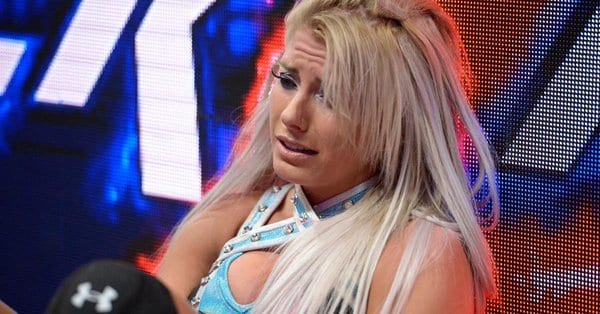 As many fans predicted, Ronda Rousey was able to defeat Alexa Bliss at SummerSlam to become the new RAW Women’s Champion in what has become one of the most talked about bouts from the night.

Bliss was part of the Connecticut Open, where she was interviewed by the CT Post. During her interview, Bliss opened up about her title loss to the “Baddest Woman on the Planet,” and revealed her thoughts heading into her Evolution match against Trish Stratus.

Commenting first on the matter of Rousey, Bliss explained that if anyone was able to take that Championship from her, she is glad it was Rousey. Additionally, Bliss revealed she will be laying in the shadows waiting for her rematch clause to take effect.

“My thing on the whole situation is if there’s anyone that had to take the title from me at least it was Ronda Rousey. Not many people can say they had their first big title loss to Ronda Rousey. I guess I’m OK.

“But I do have a rematch clause that I get to invoke at any point. Every champion is entitled to a rematch. I am preparing for that. I don’t know when it’s going to happen. She’s going to hold the title for now, but she’s not going to hold it for long.”

Bliss also revealed how she is feeling heading into the first-ever WWE all-women’s PPV where she will take on WWE Hall of Famer Trish Stratus.

“It’s very exciting. I have always loved Trish. I always watched Trish growing up. I actually got to meet her for the first time at the Women’s World Rumble Match. I wasn’t able to be part of it because I was holding a title at the time. I’m really excited to be in the ring with her, to have this match with an idol. I really want to work with Trish. I’ve worked hard for this. It might be a little harder to get mad and mean at Trish.”

Do you think Bliss could dethrone Rousey? What is your Evolution prediction for Bliss vs. Stratus? Let us know down below!