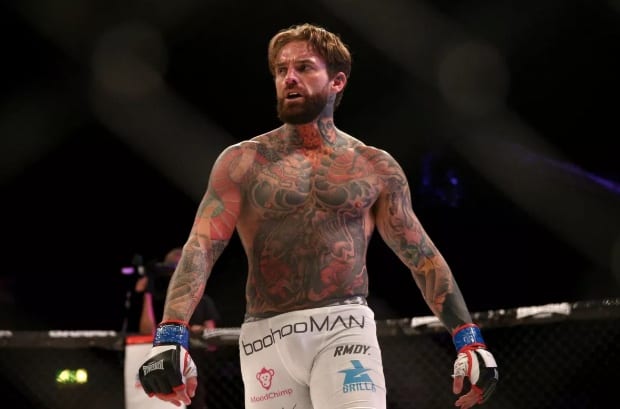 Aaron Chalmers has revealed that he’ll be appearing live in studio on Ariel Helwani’s MMA Show this Monday, where he’ll confirm what he’s doing with the WWE and what’s next for him in Bellator.

Chalmers, 31, is a 4-0 professional fighter who has been competing since early 2017. Aaron got his big break in the world of television when he joined the cast of Geordie Shore back in 2014, which is the English version of the popular Jersey Shore reality show. Essentially, for those of you who don’t know, the show entailed Aaron and the other castmates getting drunk in the party city of Newcastle before attempting to get with girls.

Alas, those days are behind him, and Chalmers is now set to speak out on why he hasn’t appeared in the cage since Bellator 200 in London where he was able to defeat Ash Griffiths via guillotine choke.

After the fight, I actually spoke with Aaron at Wembley Arena, as he confirmed that he’d be fighting exclusively for Bellator from that point onwards.

However, more question marks have been raised due to the fact that Chalmers is currently in New York City for WWE’s SummerSlam event. Nobody is quite sure as to why he’s there or whether or not it was just an invitation extended to him by the WWE UK team, but one thing is for sure, we’ll know all the answers after Monday night.

The criticisms surrounding Chalmers and his MMA journey have been well documented, but for the most part, he just seems to be an ambitious guy who is going after what he wants – which is something we can all respect.