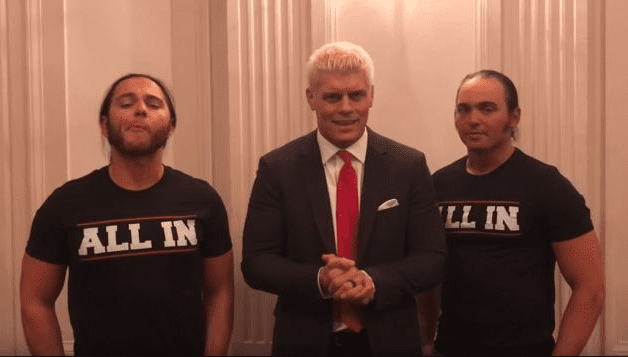 Pro-Wrestling is beginning to heat up for another run in mainstream media. The WWE is still counting their chips from their massive Fox deal that will see SmackDown moved back to Friday, and while ratings continue to dwindle, their following on the network and their youtube channels is proof that many are still interested.

Then there’s Ring of Honor who shocked the wrestling universe when they announced that they would be running a supercard event out of the WWE’s original home, Madison Square Garden during the same week the E is in town for WrestleMania.

CBS New York’s Chuck Carroll released a full write-up on ROH’s massive success and it’s quite a read. Most notable is when he asks the promotion’s General Manager Greg Gilleland about the future of big ROH draws Cody Rhodes and the Young Bucks. Gilleland says they’re prepared to do whatever it takes to keep them around, but believes in the future talent of his roster as well.

They’re our top guys, right? Of course, we’re going to do everything that we can to keep them. And we have fair offers and fair plans to retain them. With that said, I don’t think we ever operate in fear. We always operate with solid backup plans. And we have to always think about what if this, and what if that. If they go to the WWE, and they very much deserve that opportunity, we’ll continue to offer the best wrestling that we can. There’s other talent out there. And we will continue as our brand has for the past however many years. We’ve lost top guys before.

Think about Kevin Owens and even going back to Bryan Danielson and CM Punk and all of them. They all went to the WWE, and the brand has continued to grow and prosper.

Everything we do is geared toward the fans and toward, even these arena decisions, that experience. We pride ourselves on the ROH experience, and it goes back to the question of losing a top guys. Do I wanna lose the Young Bucks, and Cody? No. Of course not. Why would I wanna lose them?

Am I gonna make an aggressive attempt to retain them and sign longer-term agreements? Of course we are. But, at the end of the day, the ROH brand is about the ROH experience, and that’s how we continue to grow.

Check out the full story here.