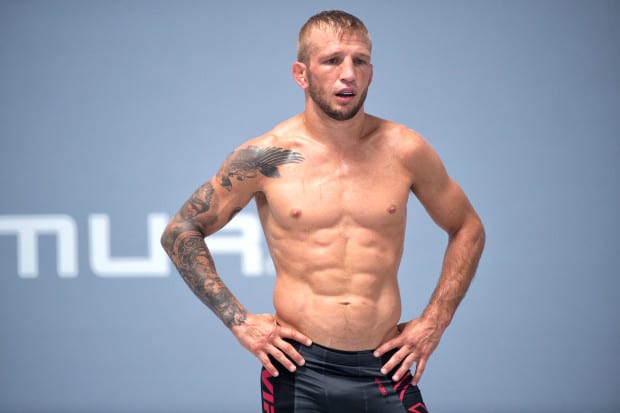 The MayMac trend seems to be continuing as Gervonta Davis, the undefeated 20-0 boxer who trains at the Mayweather gym is managed by Mayweather promotions, called out UFC Bantamweight Champion TJ Dillashaw after he beat Cody Garbrandt at UFC 227 to retain his belt.

This led to a somewhat lengthy back and forth between the duo on Twitter with Gervonta even saying that he’s ready to step into the Octagon to fight Dillashaw in MMA.

It is worth noting that Dillashaw does occasionally train with Vasiyl Lomachenko, a boxer who is often touted as a possible opponent to Gervonta Davis, whose name also cropped up when the two fighters were talking smack to one another over social media.

You can see the complete back and forth between them below.

I wanna fight the dude that fought Cody yesterday

He was then asked by a fan if he was talking about a boxing bout like the one Mayweather had with McGregor or a MMA bout. Surprisingly, Davis replied the latter.

And anyone who knows anything about TJ Dillashaw, also knows that he isn’t the type to back down.

Bring it! I heard they were handing out belts after Loma left your division https://t.co/fNnHPqFKJQ

Is this really you tweeting or it’s ya hoe John that tweet for you and loma https://t.co/Dei6MgUTLw

You wish it was someone else tweeting for me because you know you just put your foot in your mouth. https://t.co/KdmpF626tW

Then, Dillashaw turned the trash talk up a notch and directly issued a challenge to Davis when quizzed about it by Brendan Schaub. Unsurprisingly, Davis responded in kind.

If he dares to step in the octagon I would love to show him how my shin taste! Think he’s a over rated boxer as well with that padded record and I beat him in the ring. @Gervontaa I ain’t scared https://t.co/6wgmsgCGEQ

I kno I’ll knock TJ out

Do you think this will actually play out into a super fight between the two fighters…or is this just another addition to the latest trend of fighters across combat sports calling one another out?