X-Pac asks Smith Jr. if he thinks his Uncle Owen will ever be inducted into the WWE Hall of Fame. He’s unsure if it will ever happen, but he’s sure that his Aunt Martha (Owen’s Widow) doesn’t want WWE to profit from Owen’s induction. He points out that if WWE donates their profits to the Owen Hart Foundation, which she’s heavily involved in, perhaps she’d allow it. However, he simply doesn’t think she’ll ever permit his induction. 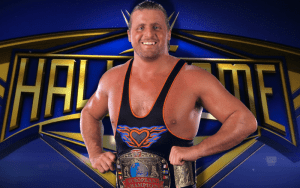 X-Pac points out that Bret Hart and Martha argued publicly over this topic recently, and Smith Jr. notes that it was hard for him to watch that dispute play out publicly. He decided to stay out of the dispute, and points out that he can definitely see both sides of the argument.

Speaking about the potential induction of his father, The British Bulldog, Smith Jr. says he’d love to induct his father if the time ever came. He points out that his father and Dynamite Kid should have been inducted a long time ago, and you can argue that they should have been inducted before plenty of current inductees. He doesn’t know what the delay is for but regardless, he hopes that they both get inducted someday.