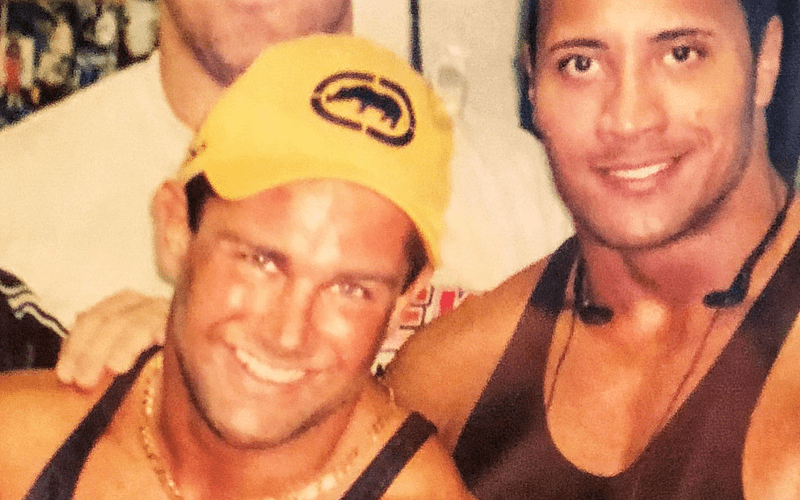 The Rock took to Instagram and wrote out a thoughtful message paying tribute to Brian Christopher, who took his own life at the tail end of last week in a jail cell in Tennessee.

Rock mentioned the time he and Brian spent together training and traveling as they slowly worked their way up the wrestling industry, both being apart of the height of the attitude era in the late 90s early 2000s.

*swipe left. RIP brother.
Spent all week trying to process the hard loss of my good bud, Brian Christopher Lawler.
He became a great friend the day I stepped foot in the small wrestling territory in the south known as the USWA to start my pro wrestling career.
We rode together daily (1500 miles per week) trained together at any gym we could find, ate together at any Waffle House off the highway, wrestled together in flea markets to state fairs, shared motel rooms together, and would always dream (and talk shit;) about what life would be like once we made it to the big leagues of the WWE.
Once we both finally made it to the big leagues of the WWE, nothing changed… we still did everything together. Including having nightly Madden tournaments after our wrestling matches in our motel room and then we’d extend our competitive spirit to a rowdy game of Wiffle Ball. Imagine us acting like crazy Wiffle Ball idiots at 2am in the parking lot of the Motel 6.
Our jaws would hurt from laughing so hard.
Then we’d finally take our butts to bed, hit the gym in the morning, drive 200 miles to the next town to wrestle and start the night all over again.
I’ll miss these times now even more.
Hurts my heart to know how Brian decided to check out.
I never knew him to be suicidal, but I guess sometimes the pain just gets to be too much for one to take.
I’ll miss you man and the times we had.
Thanks for being a great friend.
Thanks for being my boy.
My love, light, support and strength to Brian’s father, Jerry Lawler and Brian’s mother, Kay as well as Brian’s family and friends. ~ DJ

Is their truly anyone more inspirational or caring than the Brahma Bull?