Ross opens this week’s show by discussing the Extreme Rules PPV. He was a bit surprised that the WWE Title match between A.J. Styles and Rusev didn’t close the show. He thinks the WWE Title is the pinnacle of the industry, and when it’s booked on the show he feels it should go on last.

Ross wasn’t very happy with the crowd in Pittsburgh, who tried to take over the show. Things were quite bad during the Styles/Rusev match and the main event Iron Man match between Seth Rollins and Dolph Ziggler. He points out that the fans are there to enjoy the show, and it’s unfortunate when their antics take away from the matches in the ring. 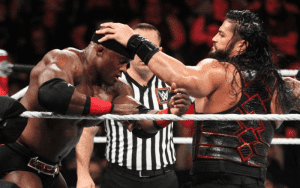 He thought Bobby Lashley and Roman Reigns had a good match. He thought their styles meshed nicely which he wasn’t really expecting so that was a nice touch to the show. He assumes Reigns will go on to defeat Bobby Lashley on next week’s RAW, moving on to face Brock Lesnar at Summerslam. Ross also thought Ronda Rousey made a nice impact at Extreme Rules, and he’s looking forward to her match against Alexa Bliss at SummerSlam.

He was surprised to see Carmella defeat Asuka at Extreme Rules but he’s still confident that when all the smoke clears Asuka will reign again. He thinks she’s too good to stay down for long, and he doesn’t think a tainted loss (with outside interference) hurts a performer at all.