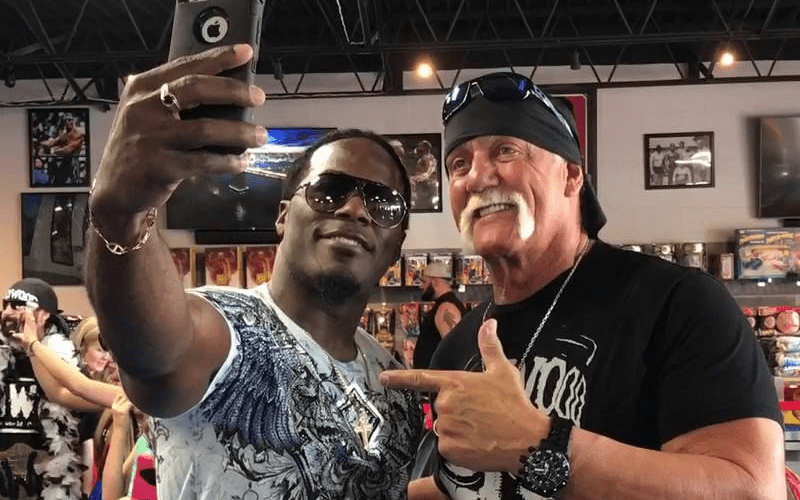 Hulk Hogan took to his Twitter account and thanks former WWE Superstar Elijah Burke for forgiving The Hulkster for his racist remarks. Burke wrote the following:

Pope’s unfiltered thoughts on Hulk Hogan’s Reinstatement into the WWE Hall Of Fame:

So as we all have learned by now, Hulk Hogan is back with the WWE. This move has garnered a lot of attention as everyone knew it would, some good and some not so good. So before I give my stance on where I stand on this whole ordeal, I’d like to reflect back on the man behind the legend, the person I came to know somewhat personally over the years while we worked together in TNA, Terry Bollea, whom I’ll refer to obviously as “Hulk or Hogan.”

I’d previously met Hulk during my stint in WWE at which time I had not even scratched the surface as far as getting my foot wet in the business. He along with Jimmy Hart and Brutus “The Barber” Beefcake was walking around inside the arena checking it out before his big match with Randy Orton at WWE’s Summerslam PPV. I went up and embraced Jimmy Hart who has always been a lovable individual and then introduced myself to Hogan and shook his hand. It was the first time I’d ever got to shake the hand of the legendary bigger than life superhero whom I grew up watching, and while I was on edge in the moment trying to be respectful of the man’s time, he shot around some questions to me and gave some advice on “playing the game” before moving on. I walked away thinking, “Man, Hulk was mad cool.”

Fast forward four years later, if someone had told me that myself and Hogan would be working side by side, standing and posing in the ring together with blood running down the face of Hulk, I’d say they were insane but that is exactly what happened. The kid whom 4 years earlier was given advice on how to play the game was now IN the game saving this legendary hero from a beat down being led by another childhood idol and favorite, “The Nature Boy” Ric Flair. It was stuff that anybody who grew up watching the sport of wrestling could only dream of, to be in the ring with the 2 biggest superstars in wrestling history, truly an Amazing Moment in my career.

I remember at the end of that night Hulk drenched in blood and sweat retreated to his private dressing room. I wanted to thank him again for the opportunity as I was still on a rush from the activities that transpired earlier. I started heading towards his room and saw that the door was wide open, I could see him sitting behind his desk but as I neared I noticed that he had company so I decided to make a U-turn as to not interrupt. All of a sudden, “Pope, where you going brother? Come on in and join me.” I turned around and entered Hulk’s private room where he was joined by, you guessed it, Brutus “The F’ing” Barber Beefcake and they were knocking down a couple of cold ones. Hulk, with his face and hair still soaked in blood offered me a beer to which I politely declined (I don’t drink, but it would’ve been cool if I did just to say so but the offer was cool enough) and we sat and chatted before I left them to be and departed for the night.

That was important for me to share because this became somewhat of a common thing with me and Hulk. It was during this time that Hogan was going thru a lot of personal hardships and struggles as detailed by the A&E documentary entitled “Finding Hulk Hogan.” I had NO idea that over the next year or so that I’d become cool with Hulk and his family. Brooke and I joked and flirted on the regular. She would often sit beside Mama Pope and scream her lungs out for me during my matches. Nick was always fun when he was around, respectful too. But the really “cool” part was Hulk letting me in. The things he would share with me when he had time to talk I simply didn’t feel like I was privy to. He shared personal detailed accounts of things he was going through at the time with me about his personal life, his business dealings, the dark place he was in but would always acknowledge that he’s in a better place now because of his current wife and him giving his life to Christ.

So now through interacting with Hogan and talking with him more and more I’ve become aware that Hogan is a believer and to his knowledge or not, he’d been talking and confiding in not just a black man, cause his new pastor was black, but he was confiding in another believer, specifically Pope. He would often share with me what his Pastor spoke on the Sunday before. Now, being that Pope is a believer I personally believe in forgiveness. Not just from God above, but from your peers among you. To forgive is to release yourself from a certain stronghold moreso than it is for the individual you are forgiving. I do believe that we all at times in our lives have done and said things that are unbecoming of us and out of character. While consequences are often a result of such error, your error shouldn’t be your definitive story. It’s what you are doing today that should determine who you are, not what you did 10-20 years ago. We as people believe in rehabilitation. We know that some can be reformed while others simply refuse to. With Hulk, I simply don’t feel that is the case. While I was upset and disappointed just as many of you were (and maybe still are), try this: “think about the worst thing that you have done thus far in your life, post it on social media and see what the world thinks of you.” Of course, no one would do such, and if so I doubt it would be a moment of truthfulness because we see ourselves thru filtered lenses, standing SO CLOSE to the mirror that we can’t see ourselves in our own wrong. Therefore we find a certain level of escape by spending so much time wishing to destroy others in their fault instead of seeing them as we all are, imperfect humans, many who are simply in need of help or guidance.

Here’s an example of my best friend for years who was a size 15 barefoot walking, 260lb redneck (wait, is that politically correct to say?) and I as well as him over the years said things to each other out of anger, but never once in my heart did I consider him a racist, or likewise. We didn’t judge each other off of what we said during our heated moments of anger, but we judged each other off of our actions, and our actions dictated that we were two brothers of different colors that loved each other unconditionally who (as the term goes today) would “Ride or Die” for each other. I’ll never forget taking him to my church and him coming to the front to sing with me the old gospel classic, “Sweet Home.” Lol

For me to hold hate in my heart for Hogan’s “sin” would imprison me, in turn causing me to be a vessel of hate myself which I simply have no time or energy for. The man behind the legend made a mistake and unfortunately will have to live with it for the rest of his life. There’s no need to take someone’s lively-hood away from them because of there past mistake. Not an ideology, but an admitted mistake during the same time the man placed a gun in his mouth.

So just take a moment to think about who your working with, or who serves you, or who’s riding next to you, or who you’re working for, etc. We are living in a world with all types of people who have done and said unthinkable things, HORRIBLE and VILE things, yet you know not of them, so you smile, laugh, and maybe even think the world of them. But furthermore think of yourself and how you look at yourself everyday in the mirror knowing your own faults…but I digress.

Hulk, if you are truly the man whom I believe you to be then you know that “Whom The Son sets free, is free indeed.” Go forward and live your life accordingly accepting the good, and weathering the bad while continuing to be a positive mark on humanity that you have been for over 3 decades.

In closing, I simply want to say, “HULK HOGAN….I Forgive You.” ~PHS

Hogan responded back with the following remarks:

https://t.co/ol3pvQxJ8d This one hit me really hard!! Thanks Pope,I love you my brother HH