X-pac opens today’s show by speaking about the death of legendary Japanese wrestler, Masa Saito. From a personal standpoint X-Pac says he was saddened to hear of Saito’s death. He adds that he loves Saito and he thanks Saito for everything he did for him early on in his career.

X-pac comments on the recent news that NJPW and ROH will host a dual-branded show at MSG during WrestleMania weekend next year. He points out that while this is an unprecedented move, these two promotions need to be careful not to poke the bear (WWE). He’s fairly certain that while these two promotions might still be considered friendly competitors to WWE, if they continue to do things like this they’re going to get WWE’s attention. 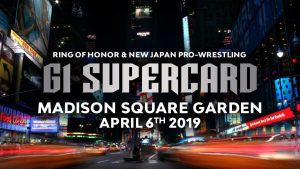 X-Pac adds that there’s no doubt in his mind that this MSG event will sell out, especially since it’s being held during WrestleMania weekend when a lot of wrestling fans will be centralized in the New York area.

Booker T mentions that he got his start in the wrestling business in Dallas, Texas. His brother, Stevie Ray had a tryout and he followed him to the tryout that day. He points out and he and his brother just wanted an opportunity, and he thought promoters would be able to do something with the fact that they were two big, good looking guys who were legitimate brothers in real life.