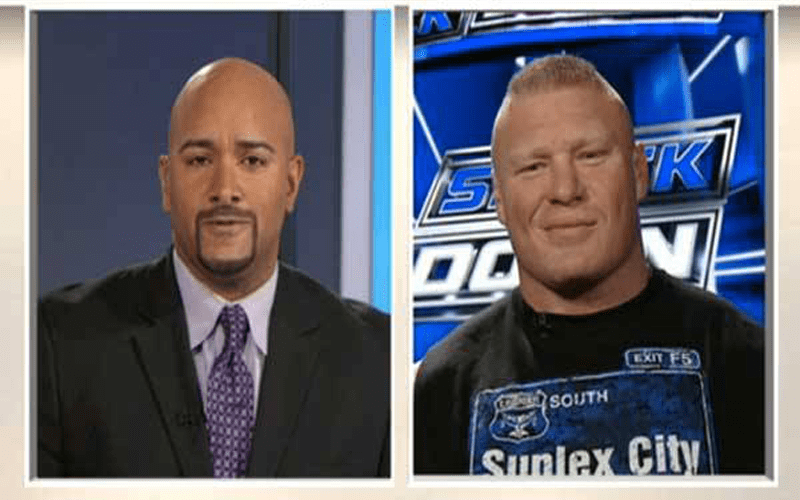 After becoming UFC Heavyweight Champion at UFC 226, Daniel Cormier invited former UFC star and current WWE Universal Champion Brock Lesnar into the octagon. Within seconds, Lesnar had walked up to Cormier, shoving him backward and laying the proverbial match down.

Lesnar reportedly reentered the USADA testing pool on July 3. After his suspension ends, following his UFC 200 fight against Mark Hunt, Lesnar will be able to fight beginning in January 2019.

WWE’s Jonathan Coachman was a guest on Busted Open Radio, where he claimed to know what led to Lesnar shoving Cormier. According to Coachman, Lesnar wasn’t happy about the conclusion of UFC 226. Apparently ‘The Beast Incarnate’ wasn’t too fond of the way Cormier invited him into the ring, which is why everything went down the way it did.

“This is a true story before we get too far away from it. I kinda say this not to take a dig at people who say ‘I’ve got these rumors, I got these real stories.’ I got this from a direct source, this is 100% fact.

“When Brock Lesnar came into the Octagon and he shoved Daniel Cormier, I said to my source who I was talking to — who was there and was backstage. I said, ‘man [Lesnar and Cormier] had to have talked about that. They had to have.’

“He was like, ‘[Lesnar] was so pissed because Cormier made it so WWE.’ Brock was so mad that he did it that way. That shove was real, it wasn’t planned, it wasn’t talked about. Him [Lesnar] coming in [the cage] was, but the shove that everyone says was so WWE — Brock didn’t want it that way. Brock wanted it just on that fine line.'”

After Cormier won, UFC broke the traditional order of interviewing fighters after the Heavyweight Title bout. Normally, the winner would speak first, followed by the loser. In this case, Stipe Miocic was not given a chance to reply after his loss.

“It was planned out that way that whoever won would call Brock in. Normally on a normal fight of that magnitude, you interview the winner and then the loser will stay and get interviewed. So I was hoping that Joe Rogan would say, ‘oh Brock you just said that about Stipe.’ It wasn’t planned that way, so Stipe was long gone.”

Who do you predict walks out victorious in the Lesnar v. Cormier fight? Are you a fan more of WWE or the UFC? Sound off in the comments below.