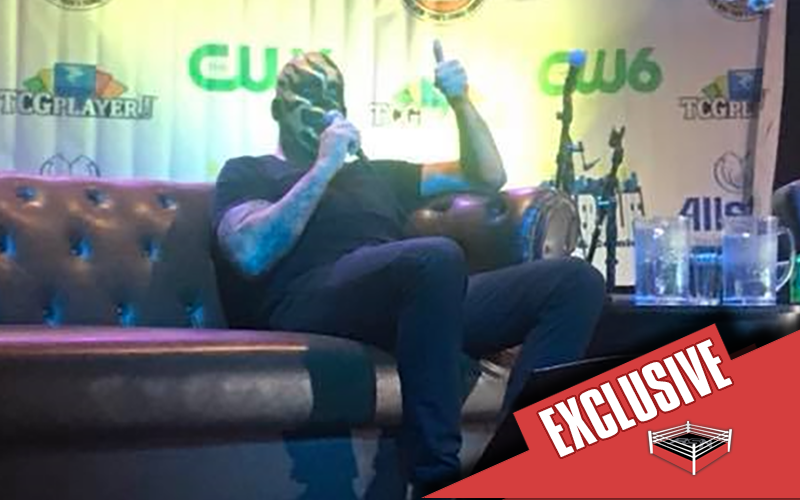 I got the chance to speak exclusively to Goldust for Ringside News when he made his first-ever comic con appearance at the The Syracuse Salt City Comic Con this past weekend. Below are a few highlights from various questions asked at the Q&A panel.

“Me, Billy Gunn, Bob Holly, Doctor Death Steve Williams, Marty Jannetty and Owen Hart were all in a Cadillac driving from Montreal to Maine. It was snowing like crazy and I’m driving. We were having some fun, and we’re on a back road. You couldn’t see anything to the right, it just looks like fields and I decide to turn the wheel to the right and drive off into the field. When I did that I saw a store that was closed, but right after that there’s an entryway or it looks like an entryway.

So I take off down that into what looks like a field but it ends up being a snowbank, and I just went boom boom boom. I stopped in the snow that was four foot high. So, we were stuck. Everyone was yelling at me “What’re you doing man? What are you doing?” I was just laughing and having fun. I tried to go in reverse, it won’t budge, we’re stuck now. It was like three in the morning, and we still have like three hours to drive. So we all get out and luckily enough a tow truck was passing, and turned around and got us out, and we didn’t have to wait to too long.

One more quick story, Owen Hart would always find a ride, and he wouldn’t ride with us that much. HE would find a ride and follow us. After one show before he left, I rented a van. It was one of those big passenger vans because there was a lot of us. Well, Owen had smoke bombs and threw them in the van as soon as we were fixing to leave. It was terrible! They were like those red and green ones. They were smoking up the van. So we had some fireworks too.

As we’re on the road and the smoke cleared, we pulled in front of them and I  had Bart Gunn in the back seat. He lit some roman candles and stuck them out the window and we were hitting their windshield. It was awesome, it was great, it was right out of a movie. It was perfect. We have a lot of fun on the road.”

On what is next for Goldust:

“I’ve been in the business 30 years. So what can I do in the wrestling industry anymore? I’m not sure except probably pass on my knowledge on to the younger talent because they need it. There’s not a lot of people here that can actually teach them how to tell stories and actually work. I’m one of those last few here, I’m one of the last of the Mohicans in the company. They’re all in their twenties, early thirties, and I’m almost fifty.

I’m still trying to hang in there with the guys, but I’m starting to figure out that the more I try that, it’s just getting harder and harder because their faster, stronger, younger. I mean, I’ve done everything there is to do short of winning the world title. I’ve wrestled just about everybody. So, I’m blessed and very happy with what I’m doing now. I hope to teach on the youngins something and leave them with something to carry on in the future.”

“Acting is after this. That is my passion now, acting. That will be after I retire from wrestling. Morgan Freeman did not get his big break until I think like 65 years old. There’s no age limit with actors really. Look at Expendables Three. It was a huge class and they were all in their sixties. Our heroes Arnold Schwarzenegger, Sylvester Stallone, all those guys, they’re old, but they’re still there. I’m coming up on 50, I still have some time to follow that dream that I have which I’ve had for a long time. Percher Woodward didn’t die just so you know.

The Bizzare One on Kayfabe:

“Kayfabe? Who’s that? Kayfabe effects the business strongly. To me, personally, I’m old school. So, I still believe in secrets and keeping secrets from the fans until we actually put it out there so they have the shock and awe value. If they know something is coming, it’s not as fun.

It’s like a movie, you know, we’re actors. We do these things and hope to get a reaction from the crowd. When they already know the reaction is coming or the outcome is coming, it’s like a letdown. To this day, I will do my very best to kayfabe. Even though the people out there think they’re smart, to me, they’re not that smart. I keep it close to my heart, the kayfabe thing. Unfortunately, it’s gone.

Everybody knows everything. There’s social media, somebody has a camera, somebody is filming something, somebody telling someone what’s going to happen because they get out of a production meeting then it explodes on the internet. I think the internet has killed our business. It hasn’t killed it because we’re doing good business, but it’s taken away some of the mystic. I love kayfabe, but who’s Kayfabe?”

If he was ever uncomfortable doing something in WWE like Owen Hart was:

“Pretty much everything 95-96 I was very uncomfortable with. Even 97, and then I just started accepting it because it was working. I’m a country boy and all those things that I was doing were so far from anything I ever knew, but I was trying these things and they were working. I guess I did an okay job because they kept putting me out there. Part of those things was uncomfortable as hell.

As nervous as I get still today, which a lot of people ask, “Do you still get nervous?”  Yes, I get very very nervous right before I go out of that curtain. I’m standing at the curtain, I don’t care what kind of match it is or who it’s against, how long it is or whatever, it’s still my nerves that get crazy, and I think that’s good for the young kids. If they’re nervous it means they care, it means I care. Once you go through the curtain it all goes away. It’s like riding a bike, you go down the ramp, you do your thing, you come back and its like, “That wasn’t so bad.”

Who he’d like to be in a feud with:

“I like feuds, a one-off match is no good for me. I like feuds, I like storylines. Ya know, I’ve wrestled Steve Austin a bunch of times in the early 90’s in WCW, and once or twice in WWF/E, but to have a program with him because we had such good chemistry, I just know that today if he was healthy, and I was at the top of my game, well, actually, I still kinda am. I think he and I could tear it up. We could have a five-star match if given the proper storyline, and the time. A 25-30 minute match, we could tear it up. Probably him, or Shawn Micheals.

We’ve had some matches me and Shawn. We’ve had some great matches. Nothing on pay per view though, we always did live events. We’d go 20-25 minutes a night and have fun, and that’s what it’s about.

Who he sees as up n comers:

“Number one would be the NXT Velveteen Dream. I think Velveteen has taken something that he has created with the little cross of Prince and Jimmy Hendrix, and kind of made this thing his own. I’ve watched it from the very beginning from his first promo’s and his first matches to where he’s at now, and how he’s grown, the kids got talent.H’es talented and has a huge future with WWE. He’s doing great at NXT but once he gets to the main stage, he’s gunna blossom. If they keep him with that gimmick, and I hope they do, he’s going to skyrocket.”

What happened with his feud with R-Truth:

“I’m not really sure. I still question that today. It had some potential, but somebody maybe didn’t see money in it, and I understand that. So you move on. I don’t know man, it’s just one of those things. I’m still looking forward to one more run. Vince told me, “You’re a special attraction, Dustin.” So I can understand that whether I’m a bad guy, good guy, and whatever he needs, and whatever role he needs me in, I’m there.

Being almost fifty years old, I’m here for the younger talent and get them to be where they need to be, or try and elevate them in some way.”

Goldust on who he hated working with the most:

“Ahmad Johnson. He was a very very scary man. Ahmad was very green. He didn’t know about the wrestling industry. He was huge, 350lbs or whatever, and the crowd liked him. When the crowd would get behind him, it was scary because I’m standing across from him and his eyes would go ugh.

He would feel the crowd and I’m standing there going, “Oh great here it comes.”He’d run through you, and it was scary, and some of the things he did to me hurt, very badly. I don’t hate him at all, just not one of my favorites I want to be in the ring with.”

“Probably R-Truth. No, not R-Truth. Hmm… probably Booker T. Booker T is my favorite. We did a lot of great stuff together.”

On his favorite matches:

How long it takes to do his face paint:

You can listen to the audio from the Q&A below.